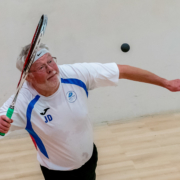 It is with great sadness that we announce the passing of Scottish Masters internationalist Jim Dougal. Jim passed away peacefully on Thursday with wife, Jacinta and his family at his bedside.

Jim was a very talented racket player. He was a tenacious match player with great touch and deception and confident of his own ability. He was successful at regional, national and international level – he won numerous Scottish regional titles and won a total of five National titles at over 55, over 60 and over 65. He won the silver medal in the European Championships in 2017, losing to John Rae in the final.

Jim’s biggest success was winning the British Masters Open men’s over 65 title in 2016 where he beat John Rae in the final.

Jim will be greatly missed by all who knew him.

A funeral service will be held at St Catherine’s Argyle Church (61-63 Grange Road, Edinburgh, EH9 1TY) on Thursday 5 March at 13.30pm to celebrate Jim’s life. This will be followed by a committal service at Mortonhall Crematorium, Main Chapel.