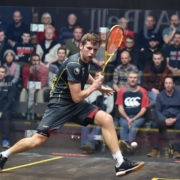 Scotland’s Greg Lobban says a significant change to the way he grips his racket has aided what’s been an impressive start to 2019.

This month has seen Lobban rise to a career high world ranking of 27 having reached the last 16 of January’s iconic JP Morgan Tournament of Champions (ToC) event in New York.

He followed that up by reaching the semi-finals of the AJ Bell Men’s British National Championships in Nottingham last week, becoming the first Scot to make the last four since John White in 2007.

The 26-year-old picked up a minor injury in early December which allowed him to focus on a grip change away from competitive action for six weeks.

Lobban believes the decision to change to a more relaxed grip, which allows more feel through his fingers, is now paying dividends.

Speaking ahead of the 2018-2019 PSA World Championships, presented by the Walter Family, which begins on Saturday in Chicago, he said: “I’ve really changed my grip completely and I’m starting to get the hang of it now.

“It felt very strange to begin with because I effectively changed a habit of around 16 or 17 years.

“It was a tough habit to break because you hold a racket nearly every day of your life.

“I got a slight injury at the beginning of December so that gave me a few weeks to make the change and my first tournament with it at the ToC went pretty well.

“I now take the ball slightly earlier, have more options and can be more positive in my shot selection as well.”

He continued: “It was a big thing to take on but I’m seeing the benefits now.

“I am getting more consistency in my results and feel I’m due a big win.

“I’m knocking on the door and eyeing up the top 25 come May and hopefully the top 20 by the end of 2019, although I won’t put too much pressure on myself.”

Lobban faces a tough first round opener at MetroSquash in Chicago on Saturday against in-form Frenchman Gregoire Marche.

The world ranked 30 player comes into the event having won the French National title last week off the back of landing the biggest title of his career at the Pittsburgh Open a week before.

Lobban added: “It’s a tough draw but you expect nothing less at a World Championships and it will be a real challenge.

“There’s no doubting he is playing well but I’m confident that the way I’m playing just now can cause him trouble.

“I have the ability to come through the match and I’m looking forward to competing in Chicago.”

Lobban has been joined in the Windy City by National Coach Paul Bell as well as Alan Clyne and Lisa Aitken who are also competing at the World Championships.

Alan Clyne (WR46) takes on the Czech Republic’s Daniel Mekbib, ranked 100 in the world, on Saturday whilst Scotland’s in-form number one female Lisa Aitken (WR43) is up against Australian Rachael Grinham (WR32).

“It’s good to have Paul (Bell) over here and having three Scots competing is really positive,” Lobban said.

“We’ve had some good results recently.

“Lisa’s playing really well, competing with the top 30 girls and beating some of them.

“It’s a good sign going forward for Scottish Squash and Rory (Stewart) had a really positive result losing narrowly to Daryl Selby, the eventual finalist, at the British National Championships.

“I think we’ve always been capable of beating the top players but beating them on a consistent basis is what we haven’t done previously.”

For full details on how to follow all the action at the 2018-2019 PSA World Championships, presented by the Walter Family, go to the official website, here.

Springfield Scottish Squash Open – Help us to help them
Scroll to top
This website uses cookies to improve your experience. We'll assume you're ok with this, but you can opt-out if you wish.Accept Reject Read More
Privacy & Cookies Policy
Necessary Always Enabled