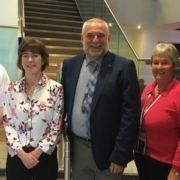 Jim was elected on to the ESF board earlier this month at the 2019 European Squash AGM in Birmingham.

His appointment comes following five years of great service to Scottish Squash during his presidency and he continues to be a driving force behind the sport, not just in Scotland but globally.

Jim is one of just five members of the World Squash Federation’s Ethics Commission and Chair of Mission 2022 which is tasked to oversee the development of home-based referees ahead of the 2022 Commonwealth Games in Birmingham.

He is also national secretary of Police Squash UK.

Last year Jim was recognised for his superb contribution to squash by winning the 2018 Volunteer of the Year award at the Team Scotland Scottish Sports Awards.

He is one of four ESF Vice-Presidents elected and will work alongside Rosie Barry (Ireland), Thomas Troedsson (Sweden) and Jackie Robinson (England) as well as new ESF President Hugo Hannes (Belgium) who takes over from Zena Wooldridge OBE (England) – all pictured below.

“I feel honoured and privileged to get the opportunity to serve on the ESF board,” Jim said.

“My role as Vice-President has responsibility for refereeing and coaching.

“I have a keen interest in these areas and it ties in nicely with my other roles as Chairman of Scottish Squash referees and Chair of the UK Group for the Mission 2022 project.

“Hopefully I can make a useful contribution going forward.”

He continued: “European squash is in very good shape.

“It was very well led by Zena Wooldridge, she set the standards and values and we have a very strong board who have a genuine interest in doing the best for squash.

“I look forward to working with them all.”