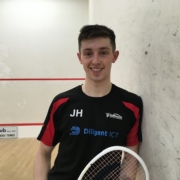 The Glasgow southsiders were the outstanding club this season going unbeaten throughout the competition.

Led by their club champion and captain James Singh, Giffnock got the better of ten other teams to secure victory this season, fending off the likes of former winners Newlands and Edinburgh Sports Club (ESC) in the process.

But their stand-out player was Scot Jamie Henderson who played in every round this season, winning all ten of his matches.

He said: “We knew we had a really good chance of taking the title this year.

“James Singh was pushing for us to give it a real go and we had a pretty strong team.

“There were some very good clubs in the league like Newlands, ESC and Grange so it was always going to be difficult.

“But we managed to get a solid team out consistently and from top-to-bottom we played well throughout the season.

“It’s great for the club to get the title and I’m sure everyone is delighted with the achievement.”

All being well, Giffnock will now be Scotland’s representatives at the 2020 European Club Championships which are due to take place in Riccione, Italy between September 16-19.

Jamie continued: “I’ve been told by James (Singh) that I will be going and it would be great to be part of.

“From speaking to the ESC guys who have been a few times, they say it’s a great experience.

“Hopefully some club members could make the trip as well to support us.”

He added: “It’s gutting to hear all the news of what’s happening in Italy and across the world regarding Coronavirus just now.

“But hopefully things will change by the end of the summer and we can get out to Italy.”

The 26-year-old’s last competitive action was earlier this month at the Sterling Trucks Scottish National Championships.

Edinburgh-based, he now spends most of his time coaching squash, at George Watson’s College and The University of Edinburgh.

“I try and bring through as many junior players as I can and it’s going pretty well at the moment,” he said.

“Along with Tino (Mackay) who also coaches, we have about 90 kids playing at George Watson’s which is great.

“But I still try and play as much as I can and the National Leagues is a great aspect to our sport because you come together as a team. I really enjoy it.”