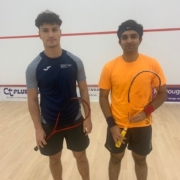 19-year-old Andrew Glen from Glasgow showed real spirit and ability as he battled to the quarter finals of the Lockerbie Challenger. He was one of four wildcard entries. Andrew was finally beaten by the number four seed Aadit Zaveri from India in an epic five game match which finished 11-7,11-6, 5-11, 6-11, 11-7. This was Andrew’s best performance of 2021 and sets him up nicely for next season.

Andrew said: “Lockerbie was great to compete in and the support from the Scottish squash team was amazing. It feels good to reach the quarters especially as a wild card. I felt like I was playing some good stuff. Right now the focus is to continue improving with the support from my coach Kylie Lindsay and sportscotland. Hopefully I can continue this momentum into 2022 and I’m looking forward to my first event in January.”

The 21-year-old Albeer Mehmood from West Lothian also made his PSA Tour debut at Lockerbie. He performed well against England’s James Wilkinson, eventually losing 11-8, 11-7, 11-8, but showing real potential for the future.

Across the draw there were some solid performances from the remaining Scots players. Wildcard John Meehan, aged 19 from Bridge of Weir, had an impressive first round win against England’s Nick Ratnarajah, winning 11-4,11-4,11-8. John carried his form into the next game against England’s number two seed and eventual finalist Curtis Malik. Despite being the underdog, John pushed Curtis all the way, starting with an epic 17-15 game where both players put everything on the line. The excursion of the first game began to tell by game two, which John lost 11-1, before finding his focus again in the last game which Malik eventually won 11-6.

Chris Leiper, aged 28 from Aberdeen, put in a solid performance in the first round, beating England’s Ben Hetherington in convincing fashion 11-5, 11-4, 11-6. Waiting for him in round two was the number three seed Abhay Singh from India. Singh had to bring his best game to beat Chris 11-5, 11-5, 11-7 in a hard fought second round match.

Fraser Steven, the 21-year-old from Thurso, had a tough battle against England’s Aaron Allpress, narrowly missing out in the first game 11-8, before Aaron made his experience tell in the final two. The game ended 11-8, 11-5, 11-6.

James Singh and wildcard Martin Ross both performed well, but were eventually beaten in their first-round games. James lost out to Owain Taylor from Wales 11-3, 11-5, 11-4, while Martin improved throughout the game in his 11-2, 11-5, 11-6 defeat to England’s Will Salter.

The final of the Lockerbie Challenger was an all-English affair with the number one seed Nick Wall and number two seed Curtis Malik battling it out for the title. The match went to form with Wall coming out the eventual winner after an incredible five game thriller that finished 11-8, 6-11, 7-11, 11-3, 11-5. This was Wall’s fourth PSA title of the year.

Lockerbie Challenger took place at the Lockerbie Squash and Racketball Club between 8th and 12th December and was the final PSA tournament in Scotland in 2021. The opportunity for Scottish players to compete in home PSA tournaments is hugely beneficial to them and the Scottish Squash performance programme. With seven Scottish players in the draw, this was an invaluable opportunity to gain experience and ranking points on home turf. See here for a summary of the results. 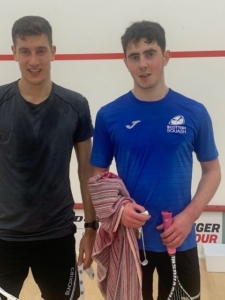 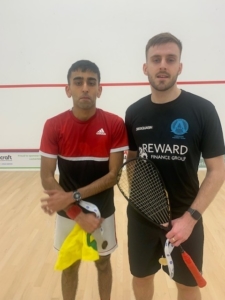 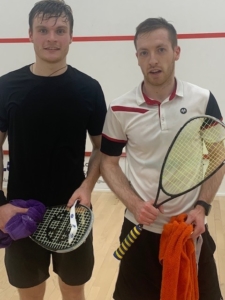