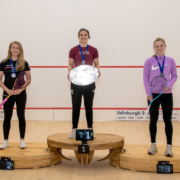 This was the first Scottish National Championships since 2020 due to recent Covid restrictions, and it was a welcome return for players and spectators alike. The event was well attended, with a genuine buzz and excitement to see Scotland’s top talent duke it out again, especially with the Commonwealth Games just round the corner. It was great to see Alison Thomson make the final after being out of action for six months as she recovered from a wrist injury.  Robyn McAlpine  made it to a senior podium finish for the first time at the age of 15 , demonstrating the strength and depth of new talent coming through. Georgia continues her great form as she continues her rise up the PSA rankings. Great performances at the World Doubles Championships in Glasgow cemented Georgia’s recent selection for the Commonwealth Games in what has been a highly successful year.

Georgia said: “I’m really happy with my performance at the Scottish Nationals, picking up my second title. My game is in a good place now, and I feel the things I’ve been working on have started coming together. It was great to play Alison in the final. She’s been out injured for a while, so it was great to see her back. I’m excited for my summer ahead as I continue my training for the Commonwealth Games in Birmingham.”

Rory Stewart’s superb semi-final victory against rival and legend of the game Alan Clyne was a real highlight in the men’s draw. This was the first time Rory has beaten Alan in competitive squash. Rory met his recent World Doubles partner Greg Lobban in the final which lived up to the billing. The match finished 11-3, 6-11, 11-9, 11-9 in Greg’s favour, with some great shots and skill on display.

Greg said: “I’m proud to pick up another national title, I felt it was good week for me – it’s sometimes tough playing against teammates. I said on Sunday that I’m glad I’m playing alongside these guys more often than competing against them. Everyone in the Scottish team are strong competitors, and there’s always pressure on me being number one to win the event, so to come out on top is pleasing. The final against Rory was great. Everyone says he’s one of the young up and coming players, but I feel he’s been this good for a long time, and the good thing now is he’s starting to believe it. I know how good he can be and he’s really starting to show it now. It won’t be long until he cracks the top 50 in the world and then beyond – his game is a good place and I’m sure he’ll back himself now. Next up, I’ve got five weeks of training ahead of the Commonwealth Games. I hope the Scottish supporters can get behind us and hopefully we can bring back a couple of gold medals.”

The number four seed Fergus Richards’ semi-final battle with Greg Lobban was also one to savour with some incredible squash on display. The match finished 11-6, 11-6, 7-11, 11-7. Elsewhere in the draw, there was a strong showing from Ewen Urquhart who has returned to competitions after a 10-year hiatus. An early round upset, when unseeded Sammy Ralston beat 12 seed Albeer Mehmood, really set the tone for a highly competitive tournament. It was a gruelling five game thriller, with Sammy pipping Albeer to the post 12-14 in the fifth. The tournament was also a great experience for juniors John Green, James Newman and 16 -year-old Kyle Penman, whose performances confirm their status as rising stars in the game.

The British National Squash Championships in Manchester are currently underway. Keep an eye on the Scottish Squash news section for our competition round up.