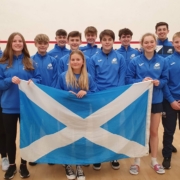 It’s been a busy few weeks in the junior squash calendar with the U13, U15, U17 and U19 all competing since mid-April. The European Junior U15, U17 and U19 Team Championships were held at Squash Time in Eindhoven in the Netherlands between the 12th -15th May and 14th-17th April respectively, whilst the Five Nations Championships took place in Warwick between the 22nd-24th April.

The U19 Europeans was a hotly contested championship with England finally coming out on top after an impressive 2-1 win over France in the final. Scotland, who were seeded 10th, came 10th after being narrowly beaten 2-1 by Germany in their 9th place playoff. The pick of the playoff was Lucy Murchie’s epic five game match against Maya Weishar, which finished 11-3, 7-11, 8-11, 11-2, 11-7.

Scotland were unlucky to miss out on a quarter final spot after a narrow loss to Wales in the pool stages. Scotland came third in the pool beating Greece along the way. The Scotland team consisted of Finlay Halton, Lucy Murchie, Kyle Penman, Rowan Niven and Adam Hunter. It was a first cap for Finlay and the last junior tournament for Lucy who has represented Scotland since U13.

The U15’s was won by Belgium, who beat England 2-1 in the final. Scotland beat Israel 2-1 in the playoffs to take 13th spot after narrowly missing out on a quarter final spot after a brave loss to the 4th seed Ireland in pool D. Scotland beat Denmark 2-1 in the 13th-16th playoffs and came third in pool D with solid victories against Greece and Ukraine. This included a dramatic win over Ukraine’s Danylo Kurylyak 11-5, 11-4, 11-2 (14m) and an emphatic 3-0 victory against Greece.

Despite their 11th seeding, Scotland came fourth in the Junior U17 category at the European Championships, narrowly missing out on a bronze medal after their 2-0 defeat to Ukraine in the third-place playoff. Despite the score, it was a close-run thing with Kyle Penman pushing his counterpart Dimitriv Scherbakov all the way in a five-game thriller which finished 11-6, 10-12, 9-11, 11-7, 11-4.

Scotland lost 2-0 in their semi-final to second seed France, with some battling performance from Robyn McAlpine and Kyle Penman, which was preceded by a great 2-0 win in the quarters against 5th seed Spain, where Kyle and Robyn both came out top against their opponents.

It was a great performance from the Scots who beat higher ranked teams and gave themselves a fighting chance to win a medal. It also marked a first call up for Oliver Hunter who has a bright future ahead of him.

Scotland also won a bronze medal in the U13 category at the Five Nations Championships, while the U15s came fifth after two close losses against Wales and Ireland in the latter rounds. The Five Nations was a great experience for some of the younger players, many of which tasted representative squash for the first time. These included first caps for Cailean McAlpine, Zack Paton, Jamie Pearman, Felicia Chan, Alice Redding, Archie Niven, Murdo MacKenzie, Ella Bannister, Isla Cargill, Sam Shannon and Louisa Kaven.

Kylie Lindsay, Senior Performance Coach said: “Overall it’s been a fantastic few weeks of Scotland representative events. There were some top performances and results, as well as a great team spirit throughout. Everyone represented Scotland proudly and gave everything they had in all the matches. As a coach you can’t ask for much more than that. It’s been great to have competitive and representative squash back for our juniors and hopefully it’s given them some inspiration for their squash going forward.”