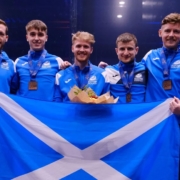 Scotland’s success at representative level continued at the weekend, with the men’s team bringing home a well-deserved bronze medal at the European Team Championships in Eindhoven between 27th-30th April. The next generation also tasted senior representative squash for the first time, with Martin Ross getting selected and Alasdair Prott and Fergus Richards winning their first caps.

In the men’s draw, Scotland beat Germany 3-1 in the third/fourth place playoff to secure the bronze after a battling defeat against England in the semi-final, which finished 3-1. Scotland topped their group B draw with convincing wins against the Czech Republic (3-1), Spain (4-0) and a hard-fought draw against Germany, which finished 2-2.

The draw was littered with standout performances, including Rory Stewart’s stunning 3-0 win against England’s world number 27 George Parker in the semi-final. Rory has continued his great form over the past 12 months, rising to 67 on the PSA rankings and establishing himself as one of the top players on the circuit.

It was also a highly successful tournament for Scotland’s young guns, with Alasdair Prott winning all his matches in his first outing wearing the Scotland jersey, beating a string of higher ranked opponents along the way. Fergus competed hard and gained valuable experience, putting him in good steads for the remaining competitions on the PSA tour.

Meanwhile in the women’s draw, Georgia Adderley, Katriona Allen and Claire Gadsby competed hard under difficult circumstances to take seventh place. Two of Scotland’s top players Lisa Aitken and Alison Thomson had to pull out shortly before the tournament due to injury, with Katriona and Claire stepping in to secure Scotland’s spot.

Despite this, Scotland’s women competed well, including a stunning 2-1 victory against Finland in group A. It was also a welcome return for Claire Gadsby after a long hiatus away from representative squash. Despite no longer competing at the highest level, Claire managed to win her five-set thriller against Finland’s Sanna Koivumaki, and narrowly lost another five-set epic against Germany’s Chloe Crabbe in a highly competitive group A draw.

Despite relegation to division 2, Scotland look forward to returning next year to secure a promotion back into the first division and compete for medals in the future.

For a full breakdown of results visit here