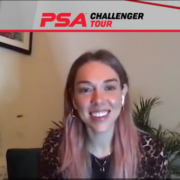 Normally on the other side of the microphone, Lisa’s now turned her hand to presenting as she waits for a return to competitive action on the PSA Tour.

Challenger Chats is broadcast on YouTube with Lisa interviewing various professional squash players from across the globe.

In the first episode she interviewed squash player Robert Downer, who spoke about his fascinating lockdown journey and future ambitions.

Last week she spoke in-depth to Spanish pro Nilo Vidal, the 22-year-old discussing the impact of his father’s death on his career and offering some tips to upcoming juniors.

Lisa said: “Sarah-Jane Perry (PSA Women’s President) and I were talking about how we can help boost the profile of some of the lower ranked players on Tour.

“We came up with some ideas and she asked if I would be keen to interview some of the players each week.

“I aim to get to know the person behind the athlete, keep it fairly conversational and have some fun by asking some quick-fire questions.

“I’ve enjoyed getting to know more about the players. With Georgia, we chatted about a number of topics, including her faith and how she’s explored that more during lockdown.”

Meanwhile, Greg Lobban was a guest on the Bishopbriggs Academy podcast recently.

In a wide ranging interview the world number 21 discussed school life, his time working as a fishmonger and the highs and lows of being a professional squash player.

Elsewhere Katriona Allen and Alan Clyne have both been speaking to online sports publication Sportageous.

Alan talks about leading from the front of Scottish squash for more than a decade, whilst Katriona, 23, chats about life off and on court.