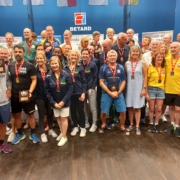 It was a double success for Scotland at this year’s BETARD WSF Masters Squash Championships in Warsaw, with Robin Ridley and Ian Ross both taking home well deserved silver medals in the men’s O65 and O75 draw.

The silver medal adds to an impressive string of results for Ian this year, having won the British Masters O70 title in February. This is the second time the Grange veteran has won silver at the World Masters, having come runner up in the States in 2018 which Ian described as the highlight of his career.

The final against the number one seed Brian Cook from New Zealand was another thriller. After the effort of drawing level in the second 11-13, Ian wasn’t quite able to maintain the momentum and was closed out 11-7, 11-9 in the third and fourth. The result was a richly deserved silver medal.

I worked hard during Covid to keep fit and improve racket skills during practice. I also had good workouts with Grange players and Scottish Masters players when we were able to get back to competitive squash.

This was my second World Masters. My first was in 2018 in Charlottesville where I won the O70s silver medal. It started to get tough by the semi-finals. Aubrey is a very talented squash player and a good friend. He is a former British Open Masters winner and a regular England player in the annual Home Internationals.

My plan was to move him around the court with drops and lobs – this worked in the first game, but Aubrey slowed the ball down with excellent serves, winning boasts and drops and he won the second and third games. In the fourth game he led 10/6 and had four match points but I battled hard and won the fourth game 12/10 and the fifth 11/9 to make the final.

Brian Cook from Australia is a formidable competitor who has won a number of World Masters titles. I lost to Brian in the WM O70s final at Charlottesville.

Brian played well in the first game using deceptive drops and boasts. I fought back and won the second game. Brian took control and won the third game and led in the fourth game – despite saving a number of match points Brian closed the match out to win the fourth game 11/9 and win the 075 World Masters title.

I’m looking forward to getting back to East League matches for Grange in September and prepare for the 2022/23 Scottish and English Regional tournaments. I also plan to help out with Junior coaching at Grange.”

Meanwhile, Robin Ridley from Dumfries was making his own history by winning silver in the men’s O65 draw, the first of his career at the World Masters. Robin was another winner at the British Masters earlier in the year, and came into this tournament as one to watch. It was clear from the start that Robin had a tough draw, with a string of five and four game matches on route to the final.

Although the final against the number 1 seed Pierr Roodt was done in three, finishing 11-4, 11-3,-11-5, Robin fought hard throughout and was a deserved silver medallist. Another super result for Scotland.

Robin said: “It was a terrific experience travelling to Poland for the World Masters, especially as it has been postponed the last few years due to Covid. The setting itself in the Hasta La Vista Club with 33 glass backed courts and two full glass courts was tremendous. It’s the largest squash club in the world and certainly looked the part after hosting 864 competitors for the whole week.

I played five games over the week and it was great to get to the final, though the game itself was a bit disappointing for myself. The South African no 1 seed Pierr Roodt has won several World Masters titles and was sheer class on the day. I felt even if I could have raised my game, there was only one winner on the day.

I’m looking forward to the new season ahead. My local club in Dumfries are holding a regional masters tournament on the 24/25 September, where we hope we can get a good entry. The club are also holding open days and club nights for anyone interested in taking up squash. It’s a great initiative.”

Elsewhere in the tournament, there were three Scots competing in the men’s O70s draw, with Emilio Fazzi and Alexander Allan making it to the quarter-finals, while Alex Sinclair made it to the second round. Emilio, who finished fifth in the tournament after a nail-biting 5/6 playoff against Geoff Walton (12-10, 4-11, 11-6, 7-11, 11-5), was only a whisker away from a semi place after his breathless tussle against the Dutch master Robert Jan Anjema in the quarters (16-14, 14-12, 6-11, 11-8). The O70’s delivered some inspiring displays from all three Scots.

In the women’s O65+ O70+ group, Scotland’s Eunice Bond topped group D with great wins against Germany’s Elisabeth Keilmann (11-4, 11-3, 11-8) and France’s Claire Bryars (11-5, 11-8, 11-6). Despite coming fourth in the 1-4 playoff,  Eunice put in some strong performances, including her 11-5 11-9 8-11 13-11 defeat to Australia’s Gaye Mitchell. Eunice never looked out of contention, fighting hard throughout all her games. Considering the quality of her performances in the playoff, she was unlucky not to rank higher, but a fourth place at a World Masters is something to be proud of.