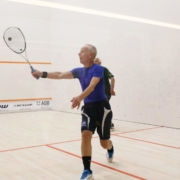 The West of Scotland Masters competition was held at the Hamilton Squash and Racketball Club on 22/23 October 2022.

This was the second regional masters competition of the 2022/23 season. Matt Bedwell was the Tournament Director and with support from the West of Scotland regional committee, he managed a well organised tournament. Some of the events initially had only 2 entries but with the consent of these players he skillfully managed to play all these 2 player finals and allowed all these players to also compete in the lower entry round robins or knockout events. He also kept all players advised of their changing start time schedules throughout the tournament.

Barry Masson, on behalf of the competitors thanked the Hamilton Club for hosting the event and thanked Matt Bedwell for all his hard work in the organisation and managing the weekend competition.

John Crawford, Alan Law and Peter Shivas supported all the players by providing refereeing services throughout the tournament.

There were 6 entries, including 2 entries from the MO40, and the competition was played as 2 Round Robins with 3 players.

The semi-finals were hard fought with Ross beating Euan 3/1 and Jacques beating Calum 3/2 to set up an all Edinburgh Sports Club final.

In the final Ross McHoul beat Jacques Laas 3/0 with all games close to win the O35 title.

Euan Allison had a comfortable 3/0 win over Erik Van Der Marel to win the O40 title.

There were 5 entries, Peter Buchan, Barry Masson, David McCormick, David Myers and Mark Sherrit. It was a well contested round robin with all players competing well.

Having won all their 3 matches Peter Buchan and Barry Masson contested the last match and final of the Round Robin.

However Peter had also entered the O50 round robin with 5 entries and had already won his 4 matches to win the MO50 title.

As Peter had already won 7 matches over 2 days, Barry was probably the favourite!

Barry won the first game, but Peter fought back to win the second – the third game was crucial. It was ‘nip and tuck’ all the way but Barry held his nerve to win 13/11. Barry then took control of the fourth game to overcome Peter and win the match 3/1  and the O45 title.

There were 5 entries, Peter Buchan, John Kynoch, James Dare and the 2 entries from the O55, Brian Robertson and Dave Sheard.

This was another competitive round robin from all the players. Peter Buchan showed all his skill and strength by winning all 4 matches and only losing one game and won the O50 title. John Kynoch won 3 games and finished runner up and Brian Robertson was in third place.

Brian Robertson had a comfortable 3/0 against Dave Sheard and won the O55 title.

There were an encouraging 11 entries including the 2 entries from the O65, Keith Gristwood and Bryan Jackson. The competition was played as a knockout.

Top seeds Chris Holt and Ronnie Carter progressed smoothly to the semi-finals. The other two semi finalists were Keith Gristwood and Norman Paterson.

Chris and Ronnie justified their seedings after hard fought wins against Keith 3/1 and Norman 3/2 respectfully to reach the final.

Chris Holt had a comfortable 3/0 win against Ronnie Carter to win the O60 title.

Keith Gristwood had a comfortable 3/0 win against Bryan Jackson to win the O65 title.

There were an encouraging 9 entries including Andy Duff from the O75.

Top seeds Emilio Fazzi and Ian Ross had good wins over Andy Duff and Brian Duffy to reach the semifinals. The other semi finalists were Warren Cameron and Alex Sinclair after hard fought 3/2 wins over Bernard Starkey and Fred Laing respectively.

Emilio and Ian had comfortable wins over Warren and Alex to reach the final.

This was a repeat of the O70 final at Dumfries where Emilio beat Ian 3/2 after both players had match balls!

This was another competitive final which Ian won 3/2 and 13/11 in the final – again after both players had match balls!

Full results are on the Scottish Squash Sportyhq website

Masters Circuit Dates for your Diary