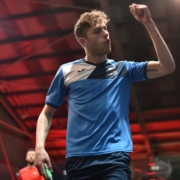 Scotland’s men and women will battle it out for a bronze medal on the final day of the 2019 European Team Championships (ETC) in Birmingham tomorrow (Saturday).

It comes after another day of drama at Edgbaston Priory Club which saw Spain’s men make an ETC final for the first time in their history after victory over France.

In the deciding rubber, France’s Lucas Serme needed a 3-0 win, while Spain’s Iker Pajares needed to take two games. Serme took the lead, Pajares levelled and then had an effective match ball before Serme regained the lead 12-10.

They will take on strong favourites England who are into a remarkable 27th consecutive final following victory over Scotland in Friday evening’s semi-final.

But Tom Richards proved too strong for event debutant Angus Gillams with Daryl Selby sealing victory with a win over Rory Stewart.

Scotland drew 2-2 with defending champions France in the group stages and will take them on again tomorrow afternoon (Saturday, 1pm) in the bronze medal match.

The French will need to pick themselves up after their heart-breaking defeat to Spain.

The French hit back with wins for Camille Serme over Lisa Aitken (3-0) and Coline Aumard over Alison Thomson (3-0).

It means the Scots will take on Belgium (3) on Saturday morning (9am) aiming to win a bronze medal in their first Division One outing since 2005.

They will be cheered on again by the Inspire ’19 Scottish youngsters, below, who took in today’s action in Birmingham.

Whatever the outcome tomorrow, Scotland’s two teams will be back competing in the top flight in 2020.

Stunning Euro bronze for men as women claim best finish in 14 years
Scroll to top
This website uses cookies to improve your experience. We'll assume you're ok with this, but you can opt-out if you wish.Accept Reject Read More
Privacy & Cookies Policy
Necessary Always Enabled