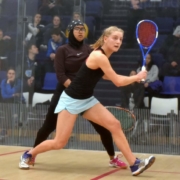 A total of nine Scots took part in the tournament played across five days at Oriam; Scotland’s Sports Performance Centre, in Edinburgh (April 3-7).

Rory bowed out in round two but his R1 win coupled with a quarter-final finish at the Swedish Open last month should provide a further rankings boost for the 22-year-old.

After a spell on the sidelines due to injury, Chris Leiper also got an opportunity to perform on the main court, showing his fighting spirit in a narrow 9-11, 11-3, 11-8, 11-7 (31m) defeat to Jordan’s Muhammad Alsarraj.

In the women’s draw, Katriona Allen continued her breakthrough season, reaching the last 16 at Oriam.

It follows Katriona’s maiden PSA title on home turf last month where she took out number one seeded Dutch player Juliette Permentier in the final at the Tayside & Fife PSA Closed Sat event in Perth.

Georgia Adderley produced a dominant display in round one against 9/16 seed Alice Mead winning 11-7, 11-9, 11-2 (33m) which set up an all-Scottish clash in R2 against in-form Swedish Open finalist Alison Thomson who received a bye.

The Crieff teenager took an early lead in her opening two games against Jasmine with the world ranked 82 player eventually pulling away in all three games to earn a 11-2, 11-2, 11-2 victory.

Carrie Hallam took to the showcourt on the opening day and was unfortunate not to take her match against hugely talented Aifa Azman (Mas) further than three games.

Carrie, who’s currently in her final year studying Neuroscience at Edinburgh University (UoE), was an invitee into this year’s event having finished fourth at the National Championships and winning silver with UoE at the recent BUCS Championships.

The 2015 Commonwealth Youth Games athlete said: “To be given a spot at this event was brilliant and such an honour.

“Having the Scottish Open return is great and hopefully can further boost squash in Scotland.

“It was great to have players like Alan Clyne competing and if we can attract even more of the best players moving forward then the event will just get bigger and better.

“University is quite intense with my final exams and dissertation and squash gives me that release I need.

“I look forward to every training session and every match.

“It gives me a lot of purpose which I’m really enjoying.”

Carrie, 21, added: “I was thrilled to finish fourth at the Nationals and the main goal at the BUCS Championships was to reach the final which our team did.

“I got to play Coline Aumard who is 34 in the world which was a great experience.

“Competing against players like her and at the Springfield Scottish Squash Open gives me a taste of that next step-up in class.”