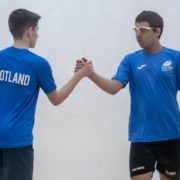 In a fitting conclusion to this year’s Joma Scottish Junior National Championships in Aberdeen on Sunday, eight-time national champion Alasdair Prott (1) took on John Meehan, who was aiming for his first national title in the BU19 final.

It was second seed Meehan who secured a tense four game victory over his rival on showcourt seven at Aberdeen Squash & Racketball Club (ASRC).

The Strathgryffe player sealed a thrilling 12-10, 9-11, 11-2, 11-9 win over Inverness ace Prott, withstanding a fightback by the top seed in game four to earn the biggest title of his career to date. 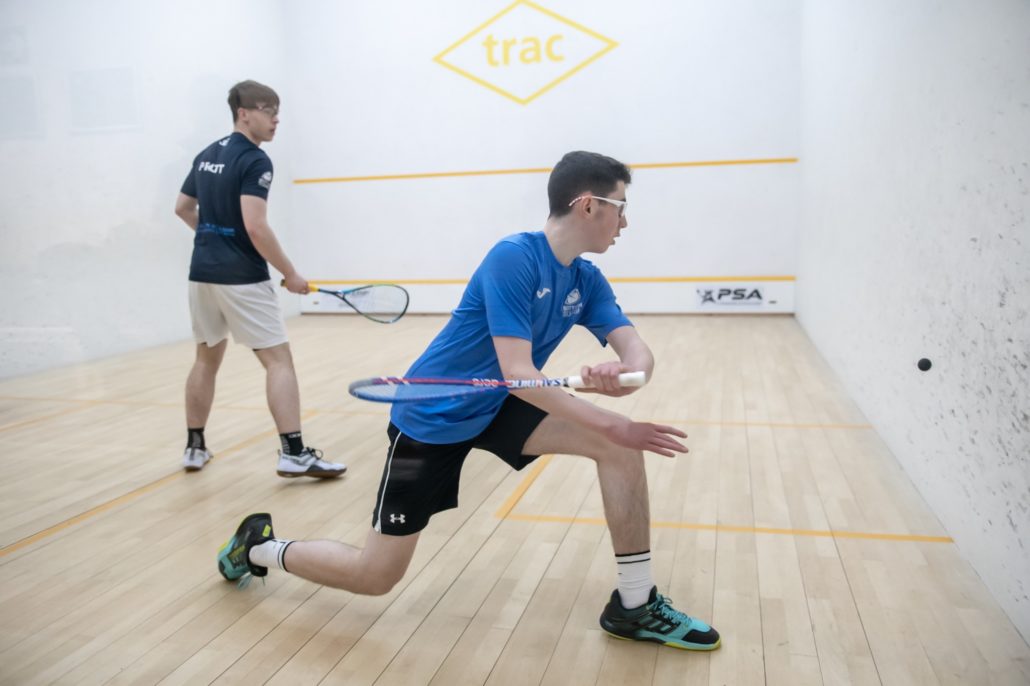 John, below with GU19 champion Georgia Adderley, said: “I am really buzzing and proud to have won.

“I have won a couple of big European tournaments but this is the big one for me, tops the lot.

“I have always wanted to win a national title and would have begun to doubt things if I hadn’t got through this.

“Congratulations to Alasdair for a really great final.

“I knew it was going to be hard, even when I went 2-1 up and was leading in the fourth.

“He is such a fighter and I never thought it was finished until the last point. He never gives up. 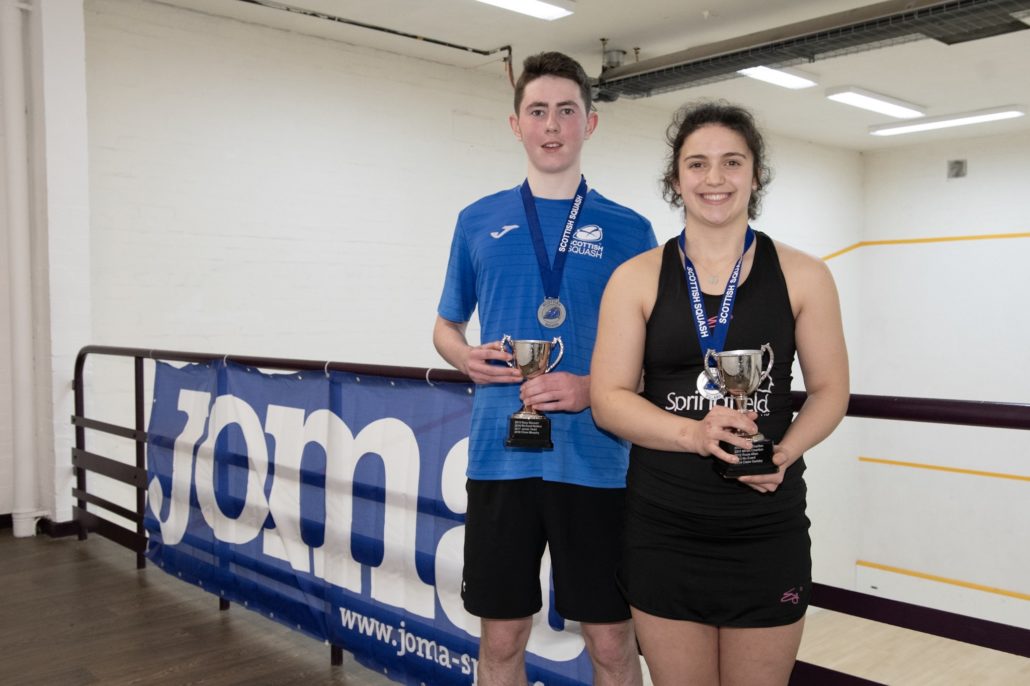 “It got so tense and I was so glad to pull through.”

He continued: “The last six months I’ve really changed my mindset. I have more belief in myself and I’m better tactically. It’s made the world of difference.

“Every match I’m going in backing myself to play my best squash whereas before I let myself down mentally.

“I know Alasdair is a really good runner and he works the ball around court so I had to be prepared to move everywhere and anticipate that.

“I had to get on the ball early and try and counter-attack a bit.”

The top seeds both won in straight games on route to the final.

Ruadhri, pictured below with Andrew, said: “I was pretty nervous going into the final which was reflective of the scoreline in the first game.

“There is no way you can come back from that if you don’t refocus. 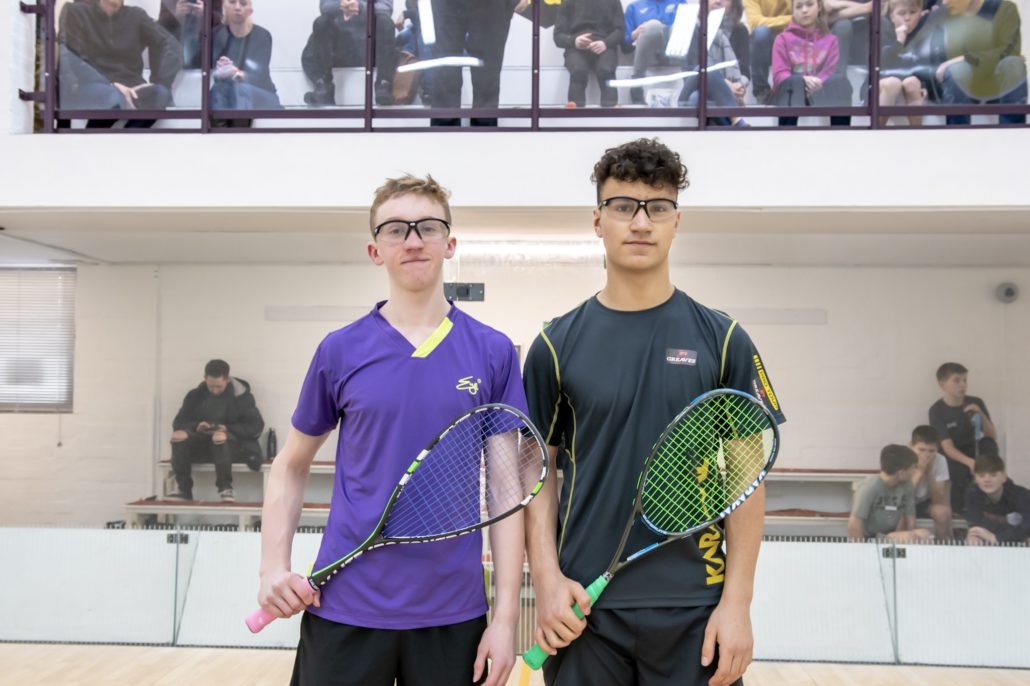 “I had to re-evaluate my game. I think I was a bit too passive, not really going for anything risky.

“I needed to inject a bit of pace and go for it in the last game.”

He added: “I have played Andrew a few times before and in the middle of the court there’s a lot of traffic.

“We are both trying to get to the ball and at the higher level in squash it can get more physical.

“I’ve tried to take that into my matches.”

He showed good character throughout the tournament, not dropping a game despite some tight encounters.

The Edinburgh Sports Club (ESC) player, below, said: “It’s a really good feeling and I’m happy to finally win a national title having reached the semi’s last year and the final against Huzaifah in 2017. 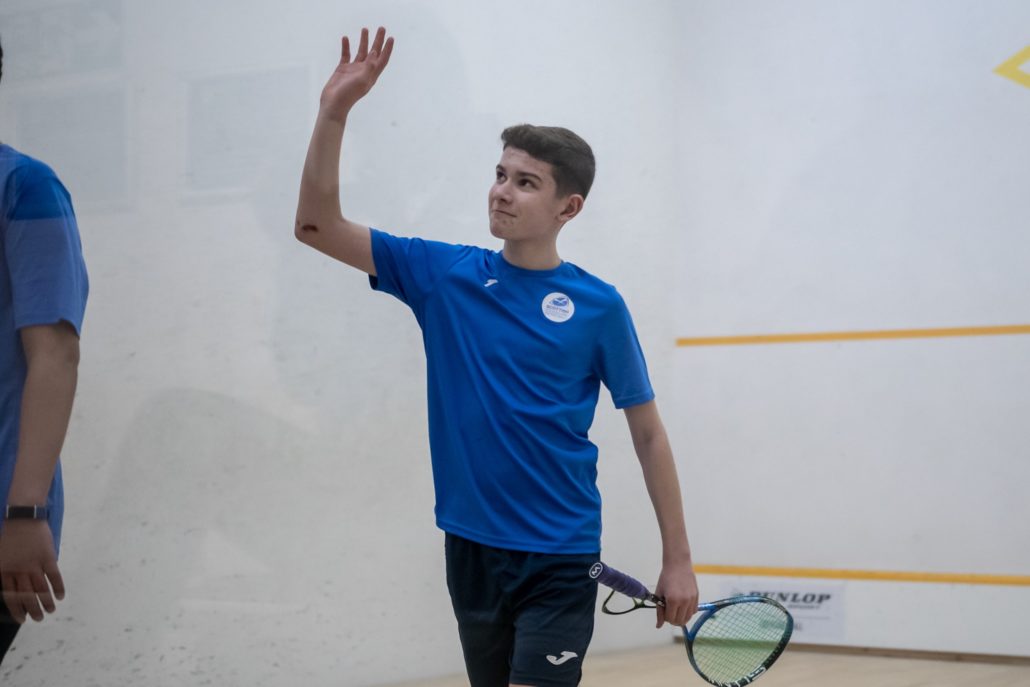 “I’ve been putting lots of effort in with Simon (Boughton) and Kevin (Moran) at ESC and have done my first Academy session which I enjoyed.

“It was a great experience playing with the very top players and that definitely helped me in this event.”

He added: “The final was difficult, I had to stick in there.

“I was able to hit the ball tighter to the back of the court and it was a struggle for him to get the ball back tight again so I could go in short and win the rallies.”

Top seed Sam had a relatively comfortable path to the final but John provided stiff opposition in the final, Sam prevailing, 11-2, 11-9, 11-8.

“I played quite well although made a few errors along the way. 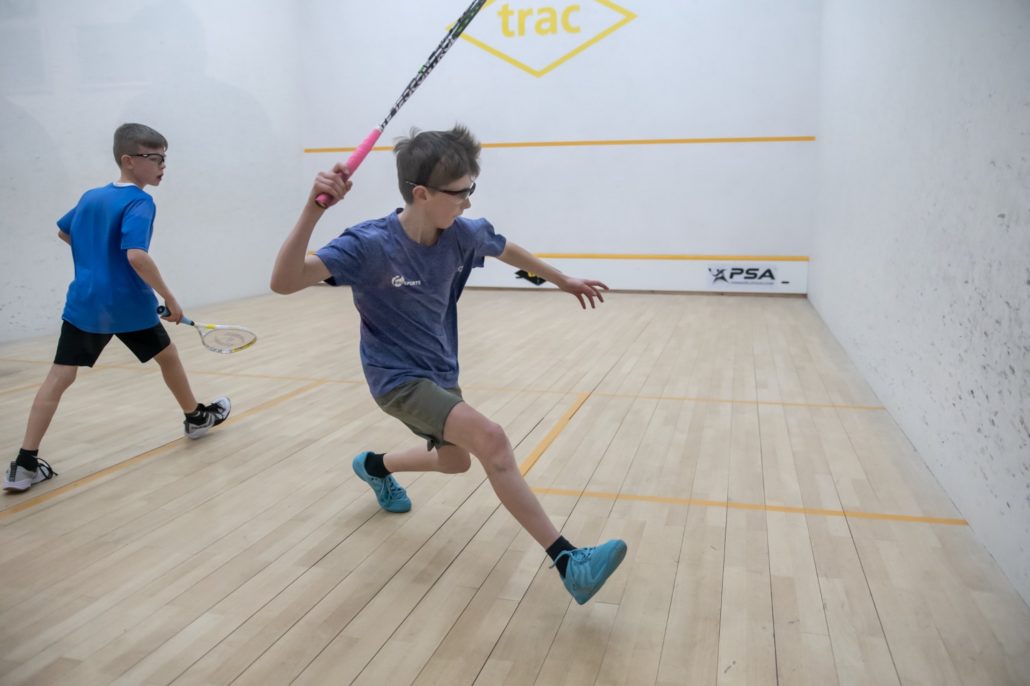 “I have been training hard with the East squad and Kevin Moran which has improved my game a lot.

“I’m trying not to show too much emotion on court and focus mentally.

“I started competing aged eight having played a lot of tennis from about three before my grandad got me into squash.”

He added: “John (Green) is younger and very talented.

“He is a really nice guy and we share a lift together every Tuesday to training.”

To go with his BU13 silver medal, Watsonian’s John Green deservedly defended his BU11 title to prove he is a name to look out for in the future. 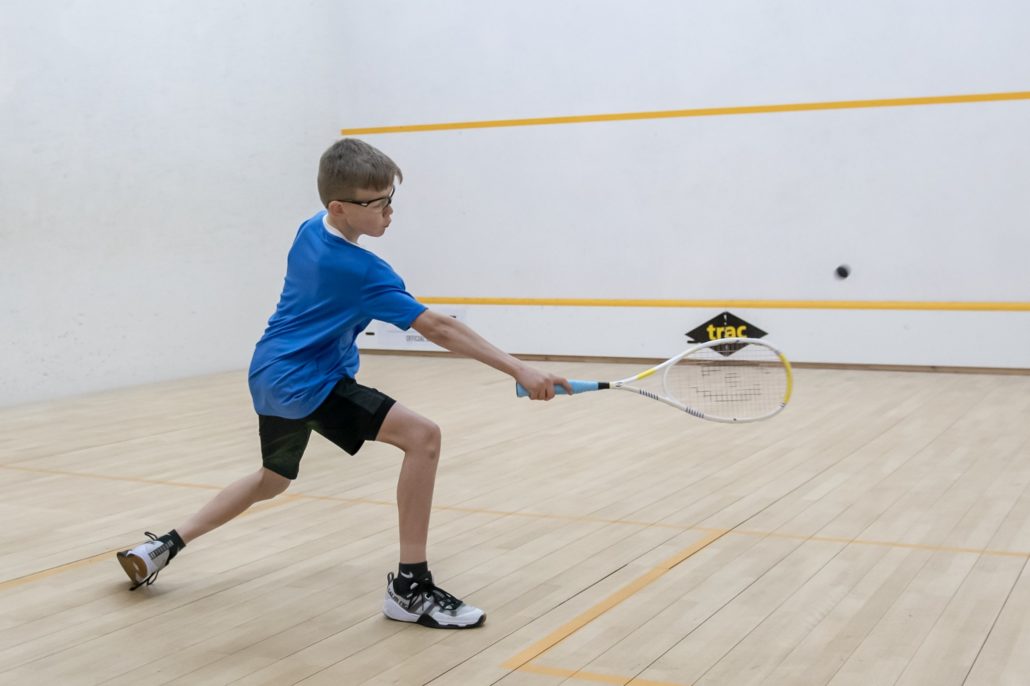 For all results and placings, click here.  Read the Girls’ report here.

Scottish Squash would like to thank Aberdeen Squash and Racketball Club for helping deliver another successful event as well as headline sponsor Joma Sports and event partner Eye Rackets. 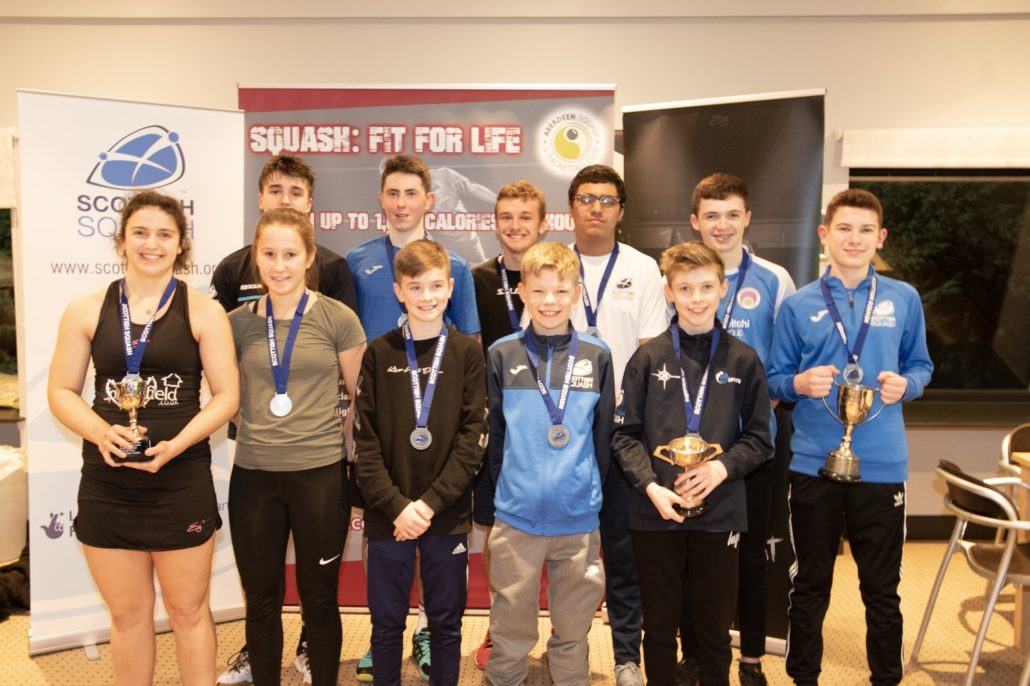