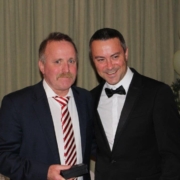 Waverley squash stalwart Dave Ferguson was delighted to be recognised in in the New Year Honours list – but admits he thought it was a joke at first.

The 65-year-old was awarded a Member of the British Empire (MBE) for Services to Squash in the King’s first Honours list.

Dave said: “I am thrilled beyond recognition to have been awarded an MBE, but I must admit it came completely out of the blue.

“I got an email in November about it, but I thought it was a hoax and I had to ask somebody who knows more about these things to double check it for me.”

His friends and family were excited to hear about his recognition – once Dave was able to share the good news.

He joked: “I had to keep it completely quiet, and I wasn’t allowed to tell anybody until it was announced.

“I don’t think anyone could believe that I was able to keep my mouth shut for four weeks!”

The squash all-rounder – known as Waverley Dave – due to his long-standing connection with Waverley Lawn Tennis Squash and Sports Club in Edinburgh has held just about every role within the club – and sport over the years.

Dave has had spells as Waverley’s Bar Convener, Squash Convener, Social Convener and is currently in his second stint as Club President.

He said: “Waverley has always been a really welcoming club, and it has given a lot to me over the years.

“All the roles that I’ve held over the years have given me a chance to give something back to the club.”

His 46-year connection with the club started as a player, where Dave made his mark as champion in consecutive years in 1985 and 1986.

And while Dave continued to grow on court, experiencing success in individual competitions and team leagues, he would also begin to make his mark as a coach and a referee.

He said: “I coached some great players over the years, including my son Chris (Ferguson) who was a very good player.

“I also did some coaching with Douglas Kempsell, although I don’t like to claim credit for any of his success because I don’t think he ever listened to me.

“He was always looking at his shoes or the ceiling, but he turned in to a great player – so maybe he was secretly listening!” 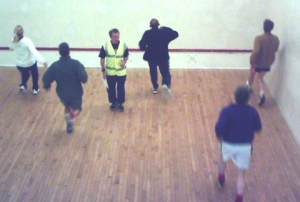 Dave putting some new coaches through their paces in 2007.

Dave earned his first refereeing qualification in 1985, and over the years progressed until he was recognised as a National Grade Referee in 2009.

He would go on to referee at the European Championships in Helsinki in 2013, and was named the Scottish Squash Referee of the Year in 2016.

He has also been involved in refereeing development in Scotland, running courses and providing training to up and coming referees.

Dave added: “Thanks to the refereeing I can say that I’ve represented Scotland.

“I was never an international as a player, so it was great to have that honour as a referee.”

Reflecting on his many years of involvement in squash, the veteran player values the friendships formed over the decades highly.

He said: “I’ve made loads of connections along the way in squash, from different clubs around Scotland.

“You make so many friends over the years on the way up, and then again coming back down.”

Dave intends to continue in his role as Club President at Waverley, which will come as good news to members at the club.

Waverley Lawn Tennis and Squash Club member David Munro said: “Having given over 40 years of voluntary service to the sport acting as a coach, administrator, referee, and constant supporter, Dave richly deserves this recognition.

“He continues to do so much for squash in Scotland, and we feel very lucky to have him as Club President at Waverley.”

Alba Storm thunder to top of Premier Squash League after clean-sweep win
Scroll to top
This website uses cookies to improve your experience. We'll assume you're ok with this, but you can opt-out if you wish.Accept Reject Read More
Privacy & Cookies Policy