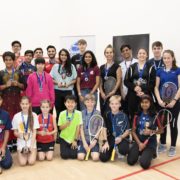 Of the 10 finals played on ESC’s renowned court 5, three went the distance with every match proving highly competitive.

England took home the most gold medals (3) with players from Pakistan and Canada claiming two apiece.

Malaysia and India juniors also picked up trophies along with Scotland’s very own Georgia Adderley who won the GU19 title having previously won the U17 version in 2016.

The competition was hosted by Edinburgh Sports Club and Oriam; Scotland’s Sports Performance Centre and attracted close to 200 competitors from across 31 different countries. 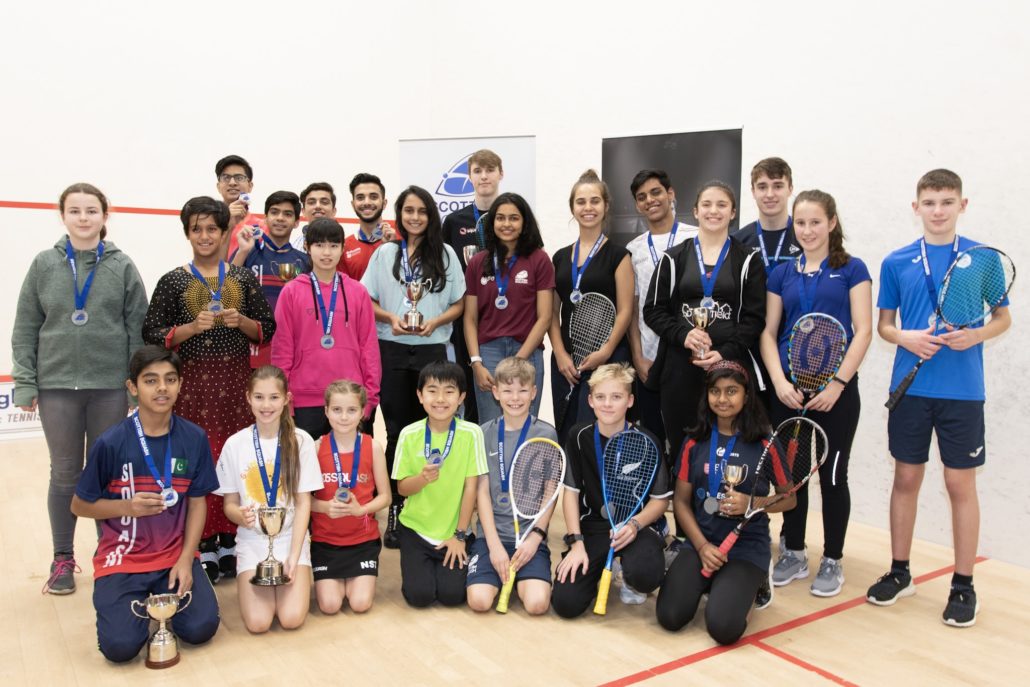 The pick of the final matches were played in the middle of the day on Sunday with both the BU15 and GU15 finalists serving up classics.

But the Japanese junior found some form, grinding out the next two games to set up a decider.

“It was a great final,” Malak said.

“After her comeback I really needed to stay focussed and keep my composure.

“My balls were landing in the middle of the court too often and she was using the drop shots well. 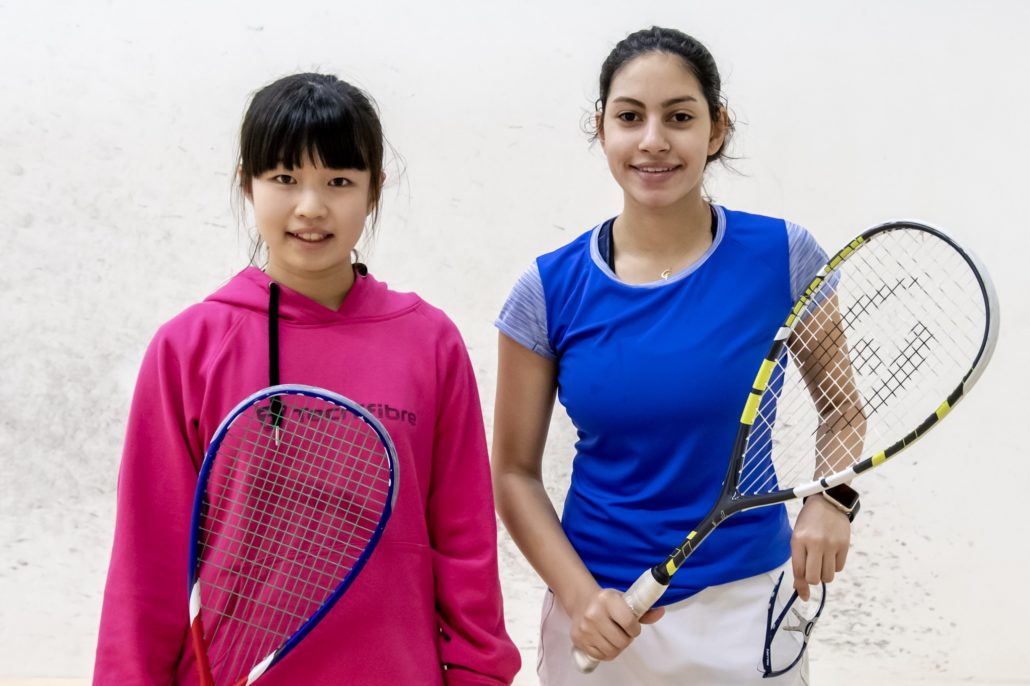 “I needed to change this in the last game and land the balls further back in the court.

“Thankfully this worked and I’m so happy to have won.”

Juan Jose is one of the best movers at U15 level with an ability to pick up any ball thanks to his lightening footwork.

Muhammad, below, said: “He’s a very tough competitor. It was very tiring but I really enjoyed the match and my fitness helped a lot. 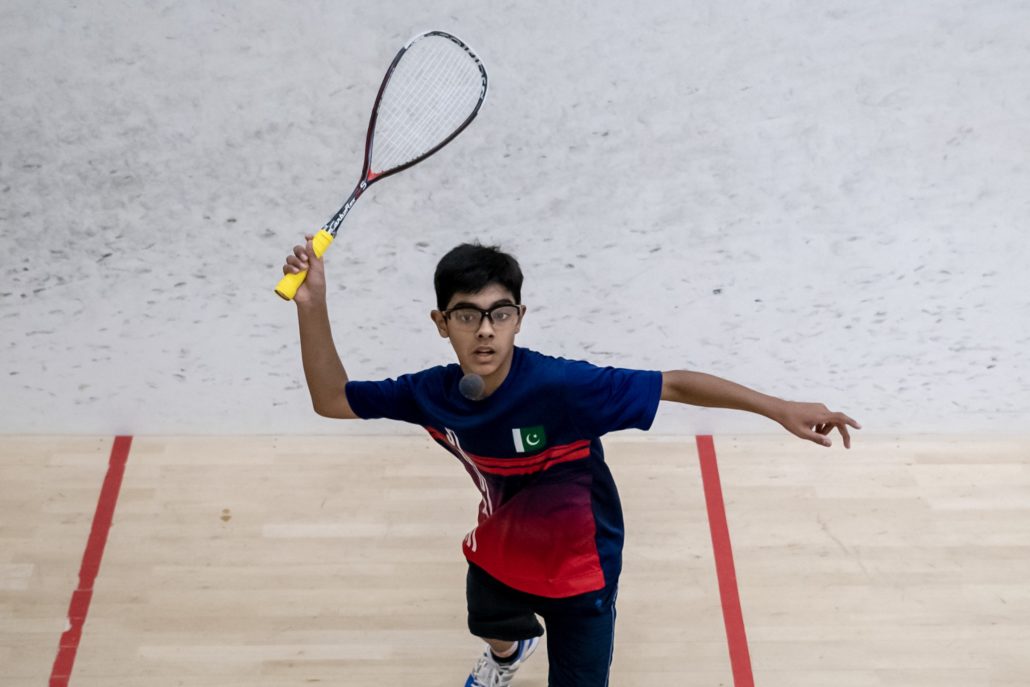 “It’s my first international event so to win is great and it gives me confidence for the upcoming British Junior Open.”

Georgia eased through the opening game 11-6 but was quickly pegged back by a hardy opponent losing the next game 2-11.

Sneha seemed to be taking control in game three but Georgia turned around her fortunes impressively winning the next two evenly fought games, 11-8, 11-7.

The two-time British Junior champion said: “I’m over the moon. 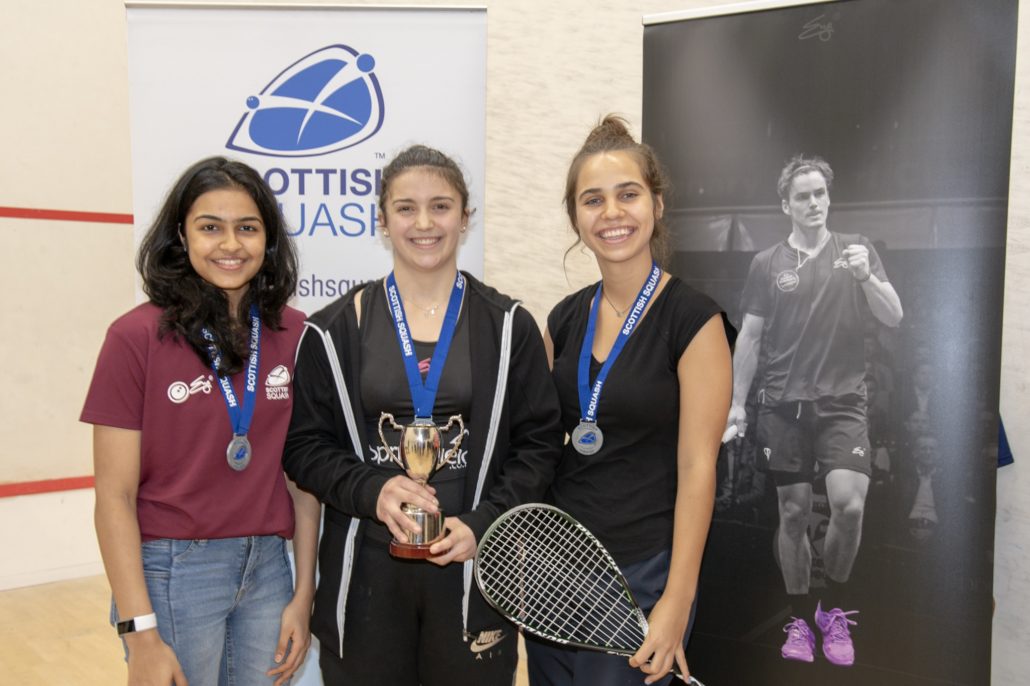 “I played the right game and managed to come through.

“In the third I was struggling mentally and I just wanted to sort that out. I hit a good length at 6-2 and after that I felt really confident on the ball.

“Playing on my favourite court in Scotland (court 5) was great and it was amazing to have the home support. Most of my family was here as well which was also nice.”

Darosham was thrilled to pick up his second ever Scottish Junior title having won back in 2015.

The Canadian said: “It feels amazing to win. You could see on court that I was full of emotions, they all came out on court and I am really happy.

“The first person I will call is my dad because he wanted me to win this title really badly. 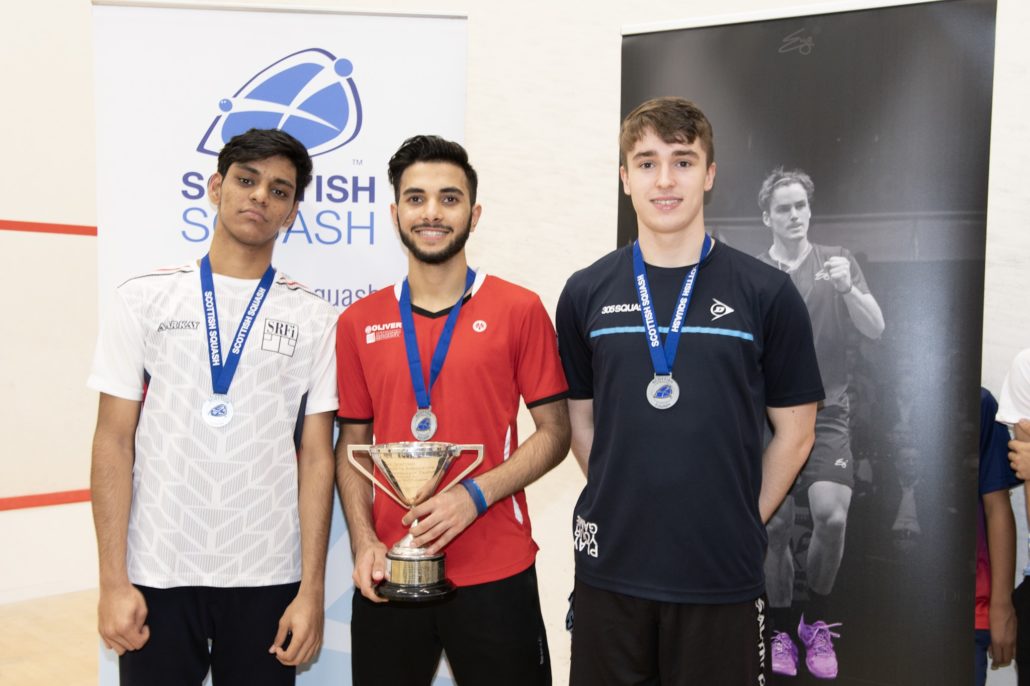 “The past two months I have trained hard for this tournament and next week’s British Junior Open and I was delighted to win in three very tough games.”

This year’s BU17 champion is Ben Smith (3/4) from England after he found a way past Pakistan’s top seed Haris Qasim.

The Grimsby-based player said: “I was glad to get through it after a tough first game.

“I had to reset and go again. 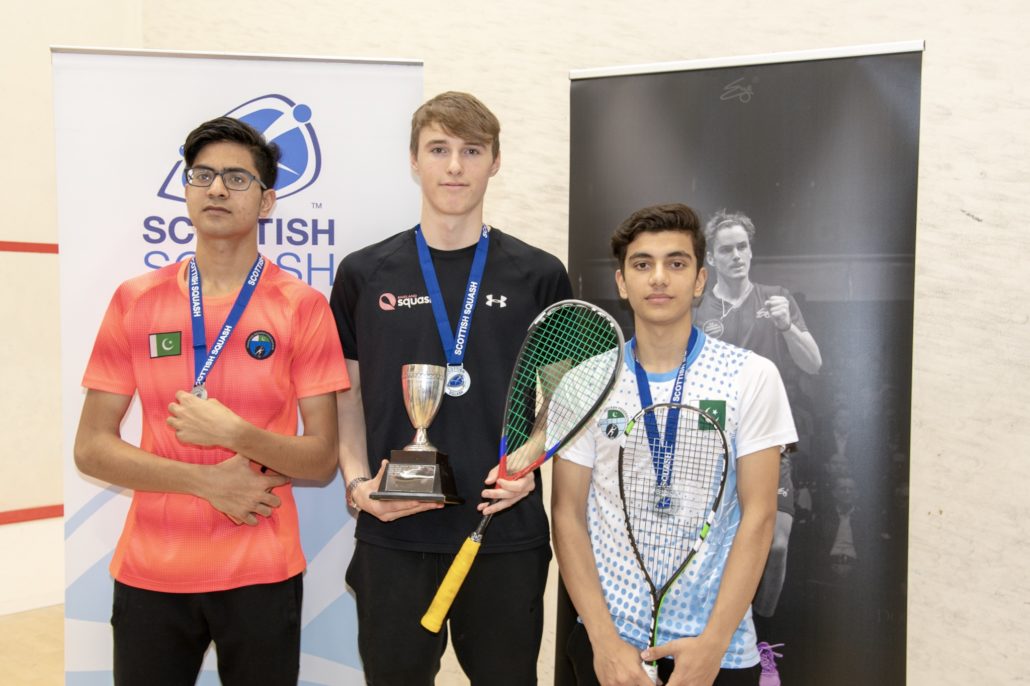 “I have been watching Haris all weekend and knew it was going to be very tough. I had to prepare well to win.

“It was my first Scottish Open and hopefully I can come back next year to compete at under-19 level.

“The facilities are really good at both ESC and Oriam and I’ve enjoyed my time here.”

Yoshna is a two-time Indian national champion and finished seventh at the Asian Junior Championships. 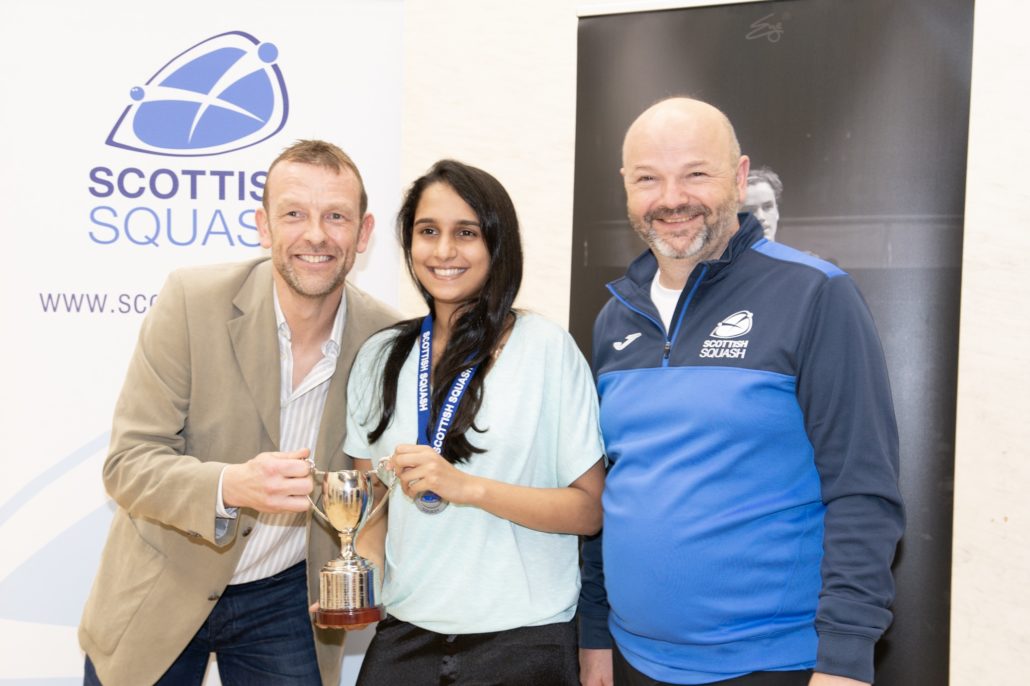 The Indian U17 no.1, above, said: “It was a good match, she is a wonderful player who made the match very tough but fun.

“She made a few unforced errors which helped me but she pushed right to the very end.”

The opening match of the day was a battle of the top seeds at GU11 level with Reka Kemecsei (1) from England beating second seed Sarbani Maitra (AUS) in another tight three game contest, 11-9, 11-8, 11-7.

Reka said: “I didn’t give up and had to keep my concentration throughout against my opponent who enjoyed a good tournament as well.

“My drops shots and volleys are strengths of mine and they worked well.” 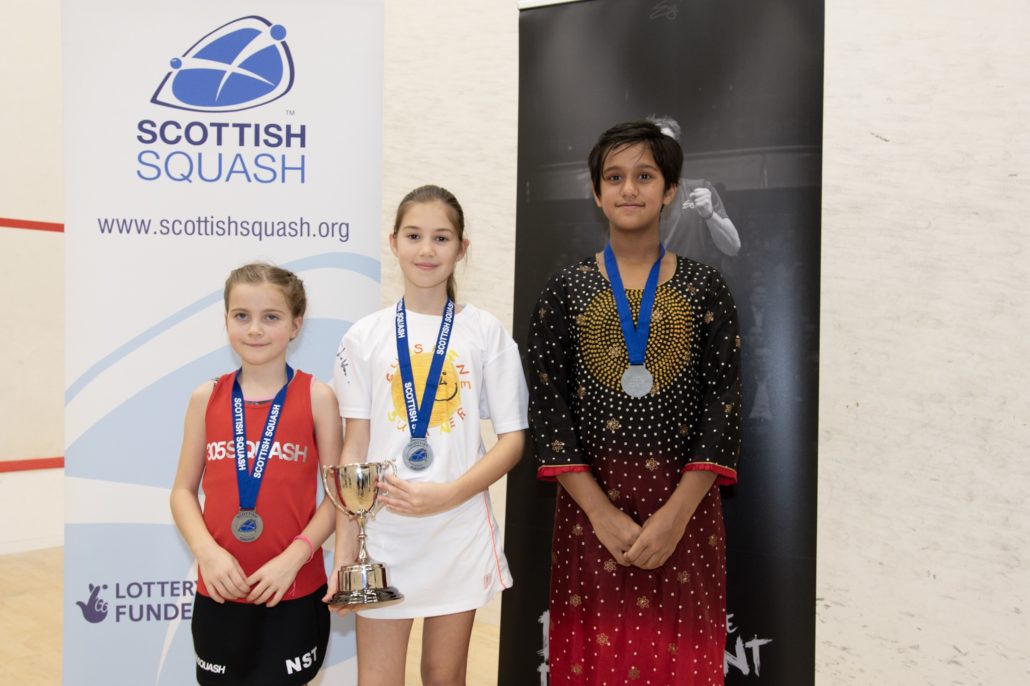 Jayden said: “I was third last year so to win this time is great. I was nervous in the final but really enjoyed playing in the tournament again.”

The all-Scottish BU11 bronze medal match was won impressively by John Green (3/4) who beat Zack Paton 11-4, 11-1, 11-0. John is pictured below with other Scottish medalists.

Renetha said: “This tournament meant a lot to me. I really wanted to win and it feels good. 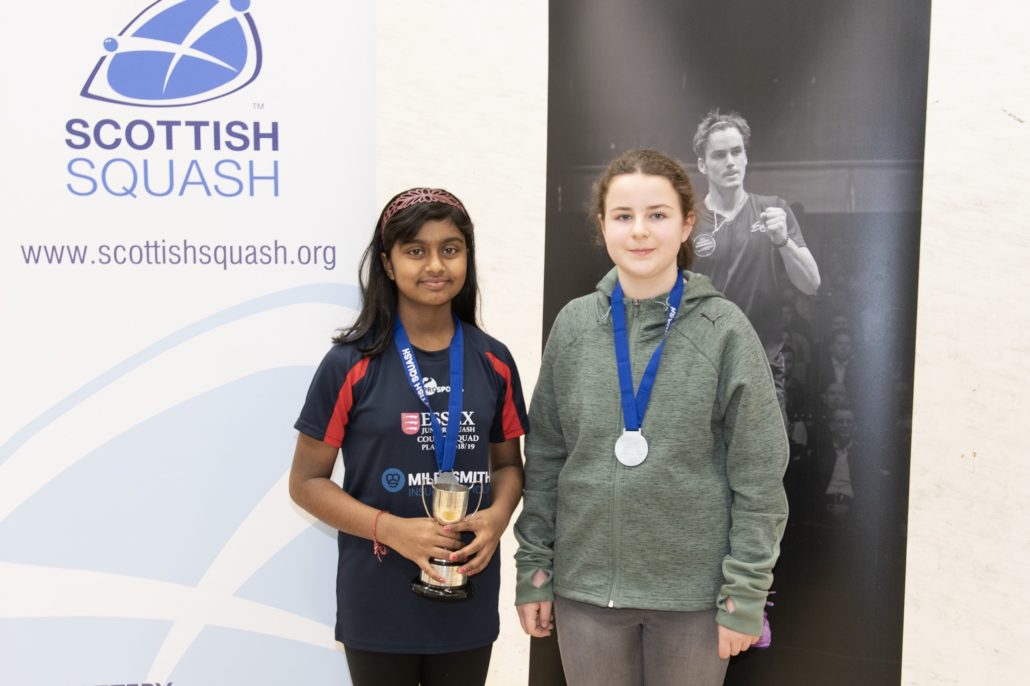 A delighted Syed, below, said: “I am very pleased to have won my first international tournament.

“I really enjoyed the event and the hospitality of the people in Edinburgh was very welcoming. I hope to come back again.” 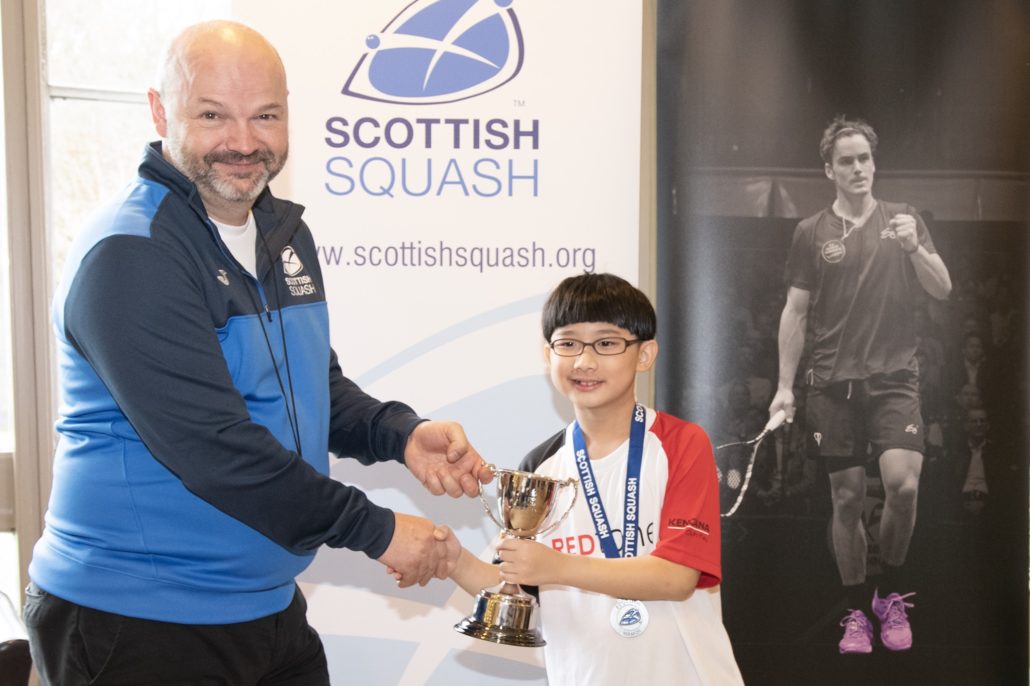 A full rundown of results can be found here.

Images from this year’s event can be found on our Facebook page, here.

Thanks also to Arnold Clark for providing mini buses to our transport team to keep people moving between venues.

Georgia Adderley aiming to build on home success at Dunlop British Junior O...
Scroll to top
This website uses cookies to improve your experience. We'll assume you're ok with this, but you can opt-out if you wish.Accept Reject Read More
Privacy & Cookies Policy
Necessary Always Enabled