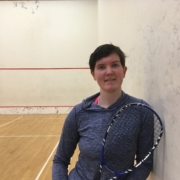 It’s January 2018 and Claire Gadsby is back on court a year after seriously injuring her anterior cruciate ligament (ACL).

She’s competing in the same tournament, on the same court against the same opponent.

Deep into the closing stages of her Bridge of Allan Senior Gold match against Katriona Allan, her ACL gives way again. This time the injury is worse than before.

It was a painful physical and mental blow for a bright Scottish talent who, in 2015, won her first ever Scottish National Senior title, aged just 18.

She followed that up a year later with her second national title.

“I had finished fourth at the Scottish Junior Nationals before winning my first senior national title a month later,” Claire recalls.

“Things were going well so picking up the first ACL injury was a big setback for me.

“It was a pretty tough time. I made use of a psychologist and doctors through sportscotland who really helped me out and I came back strongly and confidently.

“To then injure my ACL again and go through the whole process and more surgery was honestly one of the lowest points of my life.

“It was a real struggle but again I had support from psychologists, doctors, physios and coaches who were amazingly supportive.

“I wouldn’t have got through that two years without them.”

She continued: “Paul Bell (Scottish Squash Director of Squash) knew I was struggling so I took a decision to step back from squash.

“I needed a break because I wasn’t happy.

“I went from loving the game to absolutely hating it. I couldn’t even listen to the ball hit a wall let alone watch squash.”

Time away from the sport turned out to be the right call.

A three-month stint coaching golf in the USA last summer was the “best time ever,” Claire enthused.

She wasn’t planning on getting back on a squash court anytime soon after that.

But her brother Sean persuaded her to have a match ‘just for fun,’ at their home club in Crieff last September.

“Sean has probably been my number one supporter throughout,” she said.

“I remember that competitive feeling coming back so we played a few more times but I kept losing!

“That’s how I got back on court.

“From there I started practicing with talented Crieff junior Lucy Murchie and then spoke to Paul (Bell) and began hitting with the performance players at 7am once a week in Edinburgh.”

Once more Claire and Katriona are battling away in the closing stages of a Senior Gold event.

Almost three years since her first ACL injury, Claire’s back in the winner’s circle once again, beating Katriona in five games at the Scotstoun Gold Women’s Open.

She follows that up with a fourth place finish at the Sterling Trucks National Championships with, yes you’ve guessed it, Katriona Allen edging past her in a bronze medal tussle.

“I was a little nervous when I entered the Scotstoun event and to win was an amazing feeling,” Claire, 23, admitted.

“It gave me the confidence that I can do this, compete at a high level.

“Playing Katriona at the Nationals and losing hurt but I loved being out there, battling back from 2-0 down and not giving up.

“Before, in 2016, if I had lost that match I would’ve been a mess and not handled it very well.

“But I have a different perspective on life. One that doesn’t solely revolve around squash.

“That’s why, taking the break has actually helped me so much.”

And as for the future?

“I know the Scottish Squash Performance programme has changed for the better since I was last involved,” she says.

“So maybe I’ll go back full-time again. I really want to give it a go but will need to think about it and see.

“What I do know is, I love being back on court again.”

Alasdair Prott aims to maintain good form after lockdown
Scroll to top
This website uses cookies to improve your experience. We'll assume you're ok with this, but you can opt-out if you wish.Accept Reject Read More
Privacy & Cookies Policy
Necessary Always Enabled