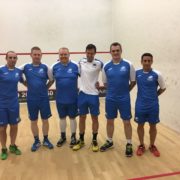 Scottish Squash are pleased to confirm the players that have been selected to represent Scotland in the 2019 Masters Home Internationals that take place during April and May.

This year it is the men’s over 45, men’s over 65 and women’s over 45 teams that have the opportunity to compete on home soil. The 2019 Scotland Masters Home Internationals takes place this year at Edinburgh Sports Club following many successful years at Aberdeen Squash & Racketball Club. The Scotland event takes place on Friday 10th & Saturday 11th May.

The full teams selected to represent Scotland this year can be seen below.