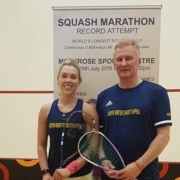 The pair smashed the record for the longest non-stop squash rally at Montrose Squash Centre recently reaching 3,606 strokes in one hour 16 minutes which surpassed the previous record by 198 shots.

He’s also broken the record for the most consecutive squash matches played non-stop and the 45-hour longest marathon match – both completed at the Angus venue.

This latest record was not all plane sailing however, with the pair’s first attempt failing just under the 2,000 mark.

But cheered on by an enthusiastic crowd they went again and broke the record.

Lisa Aitken, who begins her PSA Tour season at the Open de France in Nantes next month, said: “I’ve known Mark for a long time. He coaches me when I’m back in Montrose so I was only too happy to give it a go.

“It was a really good test of concentration. That’s what it takes, just toughing it out for more than an hour and challenging your concentration levels.

“There were posters and banners up in Montrose Sports Centre promoting the record attempt and squash and the next time I went into the centre people were asking me how it went.

“That’s the important thing for me and I am keen to be involved in anything that raises the profile of squash.

“It was for charity as well so that makes you even more determined to succeed.”

This latest record attempt was to raise funds for a young boy in Dundee, Garvie Winter, who has been fighting leukaemia most of his life.

Mark said: “Garvie is a very sick boy unfortunately. I know his grandmother and I was keen to raise funds for him.

“It’s also nice to break another world record and hopefully it can inspire more kids to play squash.”