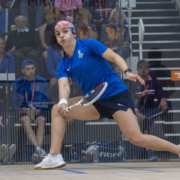 Competing for Scotland was a fantastic experience. It was something I’ve been dreaming about for years and to go and pull on the Scotland kit in front of my family and friends was something incredible.

It was an amazing event to be involved in. The whole dynamic of being part of Team Scotland was special. We all got on so well, supported each other and had a good laugh in between the matches. It was something completely new to me and something I will never forget.

I think a big thing for me is that the Commonwealth Games is nothing like any other event. I had no idea what to expect going into Birmingham and now I do. Playing on the biggest stage of all can be daunting and finding a way to deal with that and play the best you can under pressure, is a big learning for me.

It was a great experience playing with Rory Stewart and Lisa Aitken again. We played well and challenged some of the best teams in the world. Playing on the glass court was something I’ve never experienced before. The court looked great though to play on it was quite daunting but very cool.

The boys winning a medal was epic. They did so well and it was so good to be able to support them as they brought home some metal!

Losing is always hard but with it came a lot of learning. In the quarter final matches in both mixed and women’s we competed well but just couldn’t quite get across the line. Coming into the games we wanted to see what we could do and we did that, but it’s tough losing in any situation, especially at the Commonwealth Games.

I think the round of 16 in the women’s doubles was the best Lisa and I have ever played. We were totally in flow and that felt awesome. Rory and I also played well against the eventual winners of the mixed doubles. It was probably one of our best performances and it was just gutting we couldn’t get a win. I am so proud of both the partnerships, and we are excited for the future.

In the singles, I got the opportunity to play the number 1 seed. She gave me quite a lesson and I learnt a lot from that. I’m excited to get back to training and challenge myself further against top 10 competitors.

I think a big thing for me is that the Commonwealth Games is like no other event. I had no idea what to expect going into Birmingham and now I do. Playing on the biggest stage of all can be daunting and finding a way to deal with that and play the best you can under that pressure is a big learning for me and something I am going to take forwards.

Competition wise I start back up in Canada on the 13th of September at a 20k. Then hopefully a few bigger events to follow. It’s an exciting and busy few months ahead which I’m looking forward to.

For me I’m aiming for a top 40 ranking by the end of the season, as well as trying to win a few PSA titles. I’m also aiming for selection for the Europeans and World Team Championships.