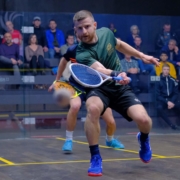 Alan Clyne has announced his retirements from the PSA World Tour, playing his final match at the US Open in a first-round defeat against Malaysia’s Eain Yow Ng. Alan will continue to represent Scotland in singles and doubles.

During his illustrious 15-year career, Alan has claimed eight PSA titles and competed in 19 finals. He achieved a career high of 24th in the world back in November 2017.

Alan has also had plenty of success in representative squash, winning gold with fellow Scot Greg Lobban at the 2016 World Doubles in Darwin. He has represented Scotland at four Commonwealth Games including the highly successful Glasgow Games in 2014, and the recent Games in Birmingham this summer.

Along with representative squash, Alan has recently taken up a coaching role at Princeton University in New Jersey, where students of the game will benefit from his vast experience.

Alan said: “I’ve had a great pro career, travelled the world, won a few tournaments and made lots of friends along the way. One of my first tournaments was the Canary Islands Open in Tenerife back in 2007. I remember it like it was yesterday, I can’t believe 15 years have passed so quickly.

Retirement from the PSA has been on the cards for a while, but taking on a coaching role at Princeton University shortly after the Commonwealth Games speeded things along.

I’ve been looking to get involved in college squash over in the states, so when the job came up, I had to take it. It’s a full-time role, so that means less time to train for the PSA tour where the level is so high and players are committing 24/7.

I was able to compete at the US Open as its close by and hoped to play in a couple of other events later in the year, but soon realised it wasn’t feasible. That’s when it dawned on me that now was a good time to hang up the racket.

I’ll miss the PSA, there have been so many highs. When you win an event it’s an amazing feeling, like nothing else. I never considered competing at the PSA as a job. I’m so lucky to play a sport I love while earning a living and travelling the world.

Now I’m a coach I feel I have a lot of knowledge and experience to pass on. I’m passionate about the job. Its great to see your players improve, and I love the team aspect of college squash in the states. I don’t know where this will lead but coaching is something I’m keen to pursue.

Playing for Scotland has always been the highlight for me, and I’m still available for selection if the opportunity presents itself. I’ll be putting in the training and fitness with the boys over at Princeton in case I get the call. If I can represent Scotland for a couple more years that would be the dream.”

Director of Squash, Paul Bell said: “Alan has been a true role model for Scottish squash over the past 15 years. He wasn’t the best junior player Scotland have ever produced but his love of the game kept him going through the difficult junior to senior transition.

Once moving to Edinburgh he took full advantage of the programme on offer from Scottish squash. I don’t think many people would have expected him to achieve as much as he did in the game, but his many achievements are testament to his unrivalled work ethic and dedication.

Alan has committed himself wholeheartedly to squash and been the ultimate professional achieving amazing things in the game while inspiring many of the new crop of Scottish players.”

Maggie Still said: “Alan is one of the true legends of the game in Scotland and his success and longevity on the PSA World Tour is testament to his hard work and dedication. He will be sorely missed.

We are delighted Alan has decided to continue to play for Scotland in representative matches. He’s an irreplaceable member of the team and will no doubt guide Scotland to more success over the coming months and hopefully years.”