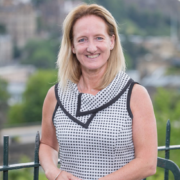 We sat down with Maggie Still, CEO of Scottish Squash, to reflect on preparations for the Commonwealth Games in Birmingham and what it means not just to the players, coaches and support staff, but to the legacy of the sport.

What is so special about the Commonwealth Games and why are they so important for the game of squash?

It goes without saying that the Commonwealth Games are hugely important to Scottish Squash and all the players who take part. The Games are incredibly competitive, with some of the best players in the world vying for medals. It’s a massive honour to play for Scotland and the highlight in any squash player’s career.

What impact does the Commonwealth Games have on so called ‘fringe sports’ such as squash, netball and hockey?

The Commonwealth Games is the only event that exposes the game of squash to a truly global audience, and this presents a massive opportunity to grow the game and reach new audiences. Squash is an incredibly fast and exciting sport both to play and watch, but it is fairly underrepresented, so this is chance to show the world what it’s all about. This we hope will inspire the next generation of squash greats to take up the game and lead Scotland to success in the future.

How does Scottish Squash turn the short-term gains of participation at the games into a long-lasting legacy?

The Games present a whole range of opportunities to grow the game in Scotland, from the grass roots up. Our job as the representing sporting body is to drive participation by increasing membership at club level and attracting new audiences that otherwise may not know the game.

We do a lot of work with players, coaches, referees, volunteers and spectators, delivering inspiring stories and content to the media to drive interest. We work closely with streaming companies to broadcast the game and highlight our top players as fabulous role models to inspire the younger generation. We are also harnessing events such as the Springfield Open, Queen’s Baton Relay, World Doubles Championships and National Championship qualifications to drive interest as we build towards the games.

We will also look to encourage investment into facilities across Scotland to make the squash environment fit for purpose, such as at the Scotstoun Club in Glasgow and other venues.

Player performance is also critical to the growth of the game as success is directly linked to investment from the commercial sector and Government. Investment underpins participation, development, performance, governance and the entire player pathway, so we make sure to shout about our successes!

The last home games took place in Glasgow back in 2014 – how does having the games in the UK help squash grow?

A home games creates a real buzz in the UK. People still talk about the Commonwealth Games in Glasgow. It made the nation proud and galvanised communities around sport. To have an event of this magnitude within touching distance represents a big opportunity to grow the game and create a legacy. We are working hard with our partners across the UK to deliver a range of activities to raise the profile of the sport, and something like the Commonwealth Games really drives this activity forward by giving everyone a common purpose. This is especially important after the disruption of Covid.

Tell us about the important role that the supporting staff, coaches, sponsors and partners play in preparing the team for a major event such as the Commonwealth Games?

I think any player would agree that a big part of their success is down to the team around them. The team has a massive role to play, supporting the player so they reach their physical, technical and psychological peak. The team around a player creates the environment for optimal performance, so a player can step onto the court feeling ready and full of self-belief and confidence. You can’t put a price tag on that.

What are your hopes and expectations from these games in terms of results and positive impacts?

The players and support team have worked with focus and dedication in the four years building to these games and their progress on the world stage has been impressive. I hope they can all keep achieving their goals and enjoy their rewards and success at the games.

Do you have a message for the players especially debutants Rory, Douglas and Georgia?

You are brilliant! A massive well done for all you have achieved to date. Stay in the moment, stay calm and enjoy the experience. At the end of the day let’s see huge smiles in the knowledge that you have done all you can to achieve your goal. Good luck!