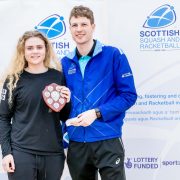 Kinross squash player Elspeth Young retained her title as Under-23 Scottish champion at the Junior and Under-23 Nationals in Aberdeen at the weekend.

Young, 20, emerged as the winner having kept her nerve to defeat her training partner Katriona Allen, from Perth, in the final.

Young and Allen, who both train at Scottish Squash’s high performance base at the Oriam centre, Edinburgh, played out an entertaining and competitive final, which Young won 3-0 (11/6, 11/7, 11/6).

The result meant that Young had managed to win the tournament without dropping a single game and had taken 71 per cent of all the points on offer during the weekend.

Young, this week competing at the British Championships in Manchester alongside Allen, said: “It feels really good to have won, I am delighted. The whole tournament has been great; it was very well run and I enjoyed it.

“The final was a bit of a struggle at times but I managed to get through it.

“I was really nervous before the match. Defending the title from last year means there is always that added pressure to win it again.”

She continued: “It makes it interesting playing Katriona because you know that you are going to have to spend time with her before and after the match.

“I think that makes the match much cleaner because we can’t avoid each other.