The TRAC Oil & Gas North of Scotland Open PSA M10 main draw is the most exciting edition of the tournament to date. Although sadly 2015 runner up Joel Hinds had to withdraw through injury, wildcard excluded, all main draw players are still ranked within the top 100 ranking places thanks to Scottish no3 and WR 99 Dougie Kempsell moving into the main draw. Even if we were looking at an M15 tournament this all-top-100 ranking in the main draw would be seldom-seen.

Looking into the qualifying draw, it gets even more interesting when we look at the recent results the qualifiers have produced lately on the PSA World Tour. Especially in the recent M25 PSA Wimbledon Cup where there were upsets galore. This shows the strength in depth throughout the PSA Mens’ Tour

Matt Hopkin enjoyed an fantastic run of form at the PSA M25 Wimbledon Cup
Matt’s amazing run of 5-setters actually ended at the hands of the no2 qualifying seed for the TRAC NoS Open… Josh Masters.

Q2 – Josh Masters WR 122
Josh proved himself a giant-killer in his own right after reaching the semi-final of the Wimbledon Cup, downing Jan van De Herrewegen (WR 106) and Henrik Mustonen (WR 56) both in impressive 3-0 fashion. He then defeated Matt Hopkin 3-0 with Matt’s previous 3 huge 5-setters appearing to have taken a toll. It was King of the M15s Omar Abdel Meguid who ended Josh’s superb run.

Q3 – Mark Fuller WR 124
Proven contender Mark Fuller hasn’t enjoyed quite the success of upsets as the top 2 qualifiers. That said, he very recently lost a tight 54-minute war 0-3 vs top Welshman Peter Creed (WR 72) and in doing so proved his determination and physical fitness. He also earned a cracking 5 game victory over fiery English prospect George Parker (WR 76) in PSL in December. Mark will prove to be the sternest of tests for anyone in the draw.

Q4 – Ashley Davies WR 132
A regular name popping up in the quarter and semi-finals of M5 events and most recently the quarter finals of the M10 Seattle Open; the tall Englishman is once again looking to improve his current ranking, having been steadily on the rise since he joined PSA in 2013.

Q5 – Youssef Soliman – WR 158
Youssef is the current 2016 British Junior Open Champion and is a seriously exciting prospect. He had an amazing run at the M25 Wimbledon Cup, carving through some seeded TRAC NoS Open Main Draw players before his run eventually ended at the hands of WR 45 Declan James. Youssef beat main draw 8th seed Chris Fuller (WR 91) and 6th seed Richie Fallows (WR 79). He proved he is playing at a level far beyond his current ranking.
Interestingly, Chris Fuller might get a chance for revenge as he is drawn to face a qualifier in the first round of the main draw…

Q6 – Joe Green – WR 150
The ‘Green Machine’ has always been known for his physical abilities. Lately he has added more variety to his game and this has seen him go from hovering around the WR 180 mark throughout 2015, to currently WR 150 and likely beyond. Joe recently made it to the final of the M5 Northumbria Open where he upset WR 99 and TRAC NoS Open main draw no11 Dougie Kempsell en route. It was George Parker (WR 76) who won the final at Joe’s expense.

Q7 – Martin Svec – WR 180
Only aged 21, Martin has already spent over 4 years on the PSA world tour and has steadily chipped away at his rankings to arrive at a career high of 174 in Jan 2016. This has slipped to 180 this month although Martin will be hoping to reassert himself among a strong field and continue his rankings climb.

Q8 – Micah Franklin – WR 189
Known around Scotland thanks to appearances at multiple Island Games, Glasgow’s Commonwealth Games and the 2014 TRAC North of Scotland Open, Micah will enjoy an element of home support. Ranked as highly as WR 155 in 2014, Micah is enjoying a recent run of comparable form. He toured the USA and Canada and made the quarter finals of the Royal Mount University Open M5.

Q10 – Tristan Eysele – WR 204
Tristan has shown incredible form this month, reaching the quarter finals of the M15 Sekisui Open. He beat WR 69 Reiko Peter on Reiko’s home turf in a 5-game thriller before losing to Kristian Frost Olesen (WR 58) in the quarters. Hopefully Tristan can continue his recent form!

Q11 – Charlie Lee – WR 224
Little brother to former WR 29 Joe Lee, Charlie has recently completed his first year on the PSA World Tour. He has shown impressive form on the Junior circuit, recently reaching the 3rd round of the British Junior Open and the quarter finals of the European U19 Championships. Charlie is now hoping to follow his brother onto PSA World Tour success.

Q12 – Rob Dadds – WR 218
In his 2 years on tour, Rob has steadily risen from WR 416 to a career high of WR 218. Rob has now arrived at his career high ranking which will hopefully will earn him better seedings at PSA events and the opportunity to show his true capabilities.

Q13-16 TRAC North of Scotland Open Local Qualifiers
Local Qualifiers are headed up by Scottish U19 no1 Ricky Hollins, who is about to travel on Tuesday to the ESF European U19 Team Champs to compete for Scotland.
Aberdeen Club Champion Mike ‘Scrapper’ Black is in the mix, as is Aberdeen National League stalwart Gavin ‘Stallion’ Sutherland. Last but definitely not least is Scottish Senior no7 Jamie Henderson.
The qualification draw will not be released as per PSA rules until Monday 28th March. The main draw is below: 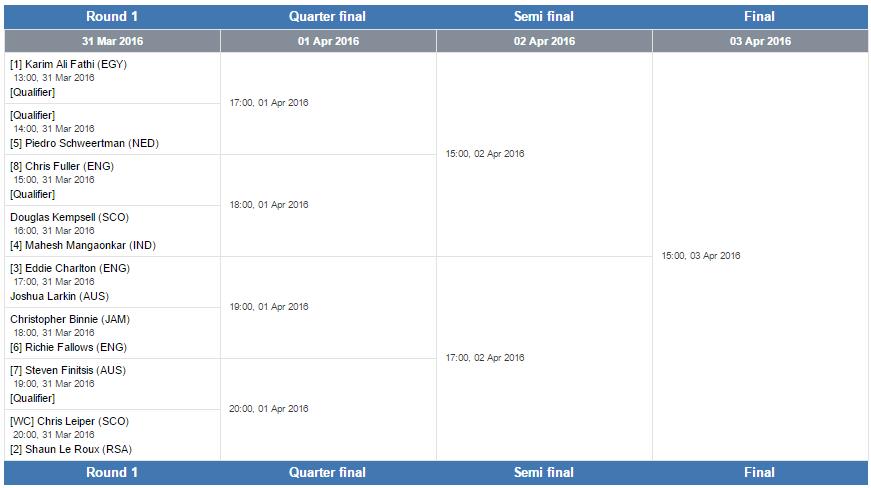 With thanks to TRAC Oil & Gas Ltd, our PSA M10 Sponsor, as well as the PSA World Tour. Thanks also to Aberdeen SRC partners AWsomesports Ltd, Scottish Squash & Racketball and of course SquashMad.com

RECAP: first Primary School Regional Competition proves a hit
Scroll to top
This website uses cookies to improve your experience. We'll assume you're ok with this, but you can opt-out if you wish.Accept Reject Read More
Privacy & Cookies Policy
Necessary Always Enabled