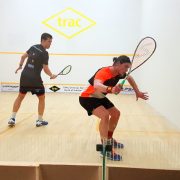 The first round of the main draw of the TRAC North of Scotland Championships got under way today, with some superb squash on display for the spectators to see. Number one seed Richie Fallows managed to srape through against the ultra-attacking Mike Harris, but not before he had a scare. Harris caught him off guard in the first two games and took an early lead before eventually Fallows’ class showed and he won in 5 games.

Although the Number 1 seed progressed to the next round, there were a number of upsets in the draw. The small but very quick Malaysian qualifier Addeen Idrakie used his phenomenal speed to good effect against Lance Beddoes (Nzl) today. Although Beddoes was in control for much of the match, the dogged retrieval of the Malaysia earned him a place in the second quarter finals.

Scotland’s Douglas Kempsell also upset the seedings today, knocking out fourth seed Chris Binnie of Jamaica. Kempsell was showing some good form ahead of this year’s European Team Championships which is good for the Scottish Team! Kempsell managed to get through in 4 games in what became a battle of mental attrition as he tried to concentrate through a match littered with stoppages and interaction with the referees.

Aberdeen home favourite Chris Leiper was also in action tonight. Chris has improved a lot in the last 18 months and it showed tonight. He was moving his higher ranked opponent all over the court and had many opportunities to win rallies. Perhaps a bit of inexperienced showed as his error count was high for this level, but he can take solace from a very competitive game against the #82 in the world.

All other seeded players made the quarter finals. Play continues at 5pm tomorrow at Aberdeen Squash and Racketball Club for the Men’s Quarter Finals, the first round of the PSA Women’s Closed Satellite and the Tony Squash Graded Event! 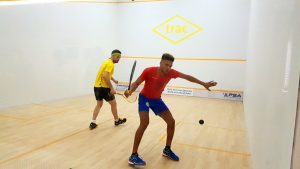