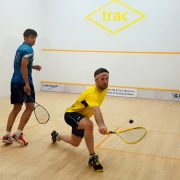 It was the qualifying finals today at the TRAC North of Scotland Championships, where four places were up for grabs in the main draw of the competition. In the first match of the day the crowds were in for a treat as the attacking Mike Harris took on the No 1 seeded qualifier Asim Khan. Harris’ shot making and all-out attack is highly entertaining, and today was on point as he beat the No 1 seed in 4 games

The second match featured South African Trsitan Eysele against Brian Byrne of Ireland. This match saw a more traditional style of play with less attacking and more patient rally building before looking to attack at the front of the court. The slightly quicker and more mobile Eysele won this more attractional battle.

The talented young French star Sebastian Bonmalais was next on against seeded qualifier Ondrej Uherka from the Czech Republic. The Frenchman impressed yesterday with his super quick and agile movement as well as his attacking style. Once again he didn’t disappoint, moving fluidly and pushing the ball into all corners of the court, beating Uherka in four entertaining games.

Last up was the remaining Scot in the qualifying draw, Kevin Moran. Kevin was up against the higher seeded Malaysian Addeen Idrakie. Probably a frustrating day at the office for Kevin. He had the game to beat Idrakie, but just couldn’t executed it consistently enough to convert the key points, eventually losing out in 4 tight games.

The first round of the main draw gets under way tomorrow with local Chris Leiper playing alongside fellow Scot Douglas Kempsell. Matches start at 12pm and spectators are welcome! 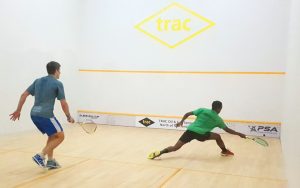 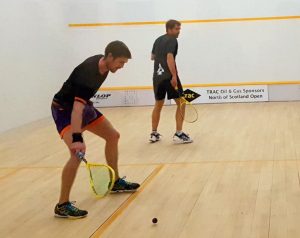 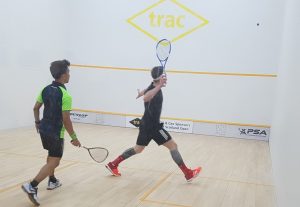