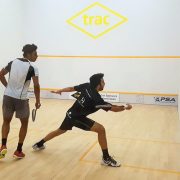 Finals day for the TRAC North of Scotland Open Championships and play opened with the final of the Division 1 Tony Squash Graded Competition. The final was between Al Prott who played in one of the local spots in the Main PSA draw earlier in the week against fellow Invernetian Martin Ross who now trains full time in Edinburgh. Both players are known for their shot making ability and played in their usual attacking way, attacking off any loose ball. Al takes the match after 5 tight attacking games of squash.

Up next was the Women’s PSA Closed Satellite Final. The final was between Lisa Aitken of Montrose and Robyn Young of the Peter Nicol Centre. The match was high paced throughout with both players attacking the front and hitting solid length. In the end Lisa’s greater mobility around the front of the court was the deciding factor today and she got through in four tough games.

And we are down to the last match of the TRAC North of Scotland Championships 2017. It’s the number two seed Mahesh Mangaonkar of India against number two seed Vikram Malhotra also of India. It turns out we are making a bit of history today. This is the first PSA all Indian final out with India – thanks to Mahesh for providing the stat and to Squash Info for confirming!

The first game was possibly the first time that we have seen Malhotra tested by a player of Mangaonkar’s class, who looked to take away the fast paced style of Malhotra by playing tight and accurate squash. Malhotra seemed unable to impose his attacking style on the game, and quickly took an early lead closing out the first game 11-3 in 5 minutes.

Malhotra came out of the blocks firing in the second game, pumping the ball into the nick either on a drive or cross court volley. Mangaonkar was there to play the ball but it just didn’t bounce! Mangaonkar now looking to straighten the ball and keep Malhotra deep in the court, then counter at the front off a loose attack; claws his way back to 6-6. Mangaonkar can’t afford to put anything loose into the front – Malhotra’s soft hands and deception are too good. The pace of the game has gone up now! Tin from Mangaonkar and Malhotra takes the game 11-8.

This game starts with the same tempo they ended the first with. Brutal faced paced rallies, both players covering all corners of the court in every rally. Mangaonkar is trying to find his tight game again in this one, just not wanting to give Malhotra anything to work with. Malhotra fails to get back several straight drops – they are just too tight to scrape up off the side wall and goes 10-3 up. Malhotra makes a spirited come back for a few points, but Mangaonkar closes out the game 11-6.

At 2-2 in the fourth game Malhotra gets a “no let” decision – the crowd think its close to a stroke! However this seems to ignite the Indian’s play, and he starts the next rally with some more of the attacking variety that has served him well so far this tournament. These boy are getting so much back! The retrieval is outstanding. But if you leave it loose, Malhotra is going to strike! Takes a 9-7 lead with a cross court nick roller! Malhotra earns a game ball with a volley drop winner… Mangaonkar saves one with a drop winner. Then another after Malhotra calls his own ball down. Malhotra gets a no let, then pumps the return of serve into the nick. Not happy with that call! Stroke to Malhotra and he takes the game 13-11! It’s going to five!

Malhotra starts the game by sending Mangaonkar on a massive taxi – Mangaonkar is nowhere. More flare from Malhotra and Mangaonkar is doing multiple court sprints. A few stoppages creeping in now, both players tiring and struggling to get through and play the ball. Referees having none of it – no let every time! More end to end stuff. Malhotra on fire now! Mangaonkar is doing so much work. Malhotra is just showing too much class here. Magaonkar is just struggling to get the ball back, everything on the last string of his racket. Vikram Malhotra is the new TRAC Oil and Gas North of Scotland Open Champion 2017! Taking the fifth game 11-4. Brilliant quality all match, superb final.

Semi – final day at the TRAC North of Scotland Open Championships here at Aberdeen Squash and Racketball Club, and we were treated to some superb squash from all players. Up first was no 1 seed Richie Fallows against Indian No 3 seed Mahesh Mangaonkar. Top seeds have a habit of being toppled on ASRC’s show court and today was no exception. Fallows was unable to keep his composure at the key moments, and really struggled to avoid clipping the top of the tin. His high error count coupled with some excellent retrieval from Mangaonkar saw him take the first match of the day 3 games to 1.

The second match of the day saw the young Malaysian Eain Yow Ng who had a marathon match with Scot Douglas Kempsell last night take on the talented Indian Vikram Malhotra who plays at a frantic pace! Malhotra tried to use his pacey game to quickly tire Eain Yow. Despite a spirited comeback which saw the Malaysian take the third game, Malhotra ran away with the fourth game; Eain Yow having no answers to the Indian’s fast style of play.

We are informed by Mahesh that this is the first all Indian Men’s PSA final! Both players to seem to be excited to be part of an hostori final – Indian squash must be on the up! Play Starts at 1pm tomorrow where we have the final of the Tony Squash Graded Event, the final of the PSA Women’s Closed Satellite (1.30pm) and then lastly the final of the main PSA Event at 3pm at Aberdeen Squash and Racketball Club. Spectators are welcome, and viewing is free!