The semi-finalists were decided today at the TRAC North of Scotland Open Championships with some high class squash on show. The first match of the day had No 1 seed Richie Fallows against Malaysian qualifier Addeen Idrakie. The ridiculous speed and retrieval of Idrakie caused problems for Fallows, but in the end Fallows solid base game was enough to overcome the Malaysian.

Mangaonkar started faster today, and play only got quicker the more the match went on. The tempo was high throughout and the ball was being played into every corner of the court. It was also great to see some real sportsmanship from both players – calling their own double bounces and tins throughout the match.

The third match of the evening saw the last remaining Scot Douglas Kempsell against the taltent young Malaysian Eain Yow Ng. An absolutely brutal encounter. 92 minutes of end to end stuff, so much so that Dougie played half of the last game with cramp! Dougie went 2-0 up, and was playing some of his best squash, but the steady Eain dug deep and eventually ground out the match in 5 tough games.

Finally on ASRC’s show court was No 2 seed Vikram Malhotra from India, playing Kiwi Evan Williams, ikram plays at a ridiculous pace and tonight was no exception. Williams retrieved well, but didn’t really seem to have an answer for the relentless onslaught. Vikram will be tough to beat if he keeps playing like this.

Play continues at 3pm tomorrow at Aberdeen Squash and Racketball Club for the Men’s Semi Finals, the second round of the PSA Women’s Closed Satellite and the Tony Squash Graded Event! 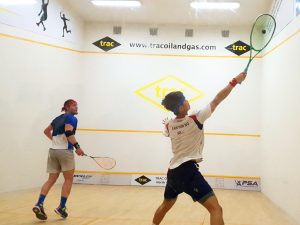 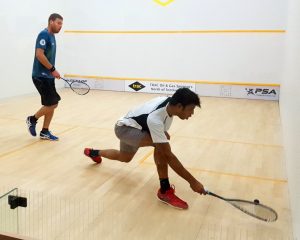 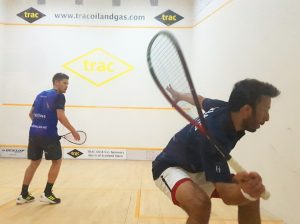