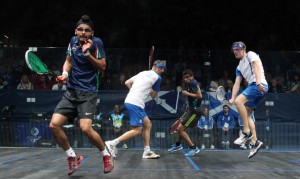 It’s now 2 months since the Commonwealth Games came to an end and, with the recent launch of the new Scottish Squash website, I thought it would be appropriate to document some of my experiences of Glasgow 2014. Much has been said about the success of the event in general and the squash in particular and those who are reading this will no doubt already know all the results. So here’s my take on one of my best memories from the Games…

Day 9 of the Games, and what turned out to be our final match, was in the quarter-finals of the Men’s Doubles – against Australian pair, David Palmer and Cameron Pilley. They had won 8 Commonwealth medals between then, including 6 in doubles. Greg Lobban and I were under no illusion that this would be the toughest match we had ever faced as a team. To prove the point, two days later Palmer and Pilley added another 4 medals to their collection, 3 of which were Gold! 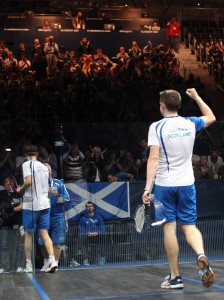 We went into the match on the back of some good form but knowing we would need to improve significantly if we wanted to seriously challenge the Aussies. Having said that, we’d been improving with every match, slowly becoming more comfortable with the unique environment that a home Games provides.

We had won our previous match 11/9 in the third (doubles is best of 3 games) over the higher-seeded Indians, Saurav Ghosal and Harinder Pal Sandhu. In that match, Greg put in a superb performance – producing some sublime shot-making when we needed it most. This was not the reckless “all-or-nothing” shot-making that he was known for a few years ago… this was calculated and clinical, patiently waiting for the right moment to attack and then executing with the sort of maturity and precision that only the very best players in the world can aspire to. It was all the more remarkable given the importance of the occasion and it made me realise that, if we were to continue to be successful, we would need to lift our games even more on the following day. 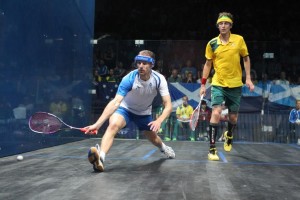 Prior to the match against the Australians, I felt a unique mix of emotions. On one hand I was calm and relaxed. We’d played on the Glass Court three times already and felt comfortable in its surroundings.  The crowd and noise had taken some getting used to but we were now feeding off the energy that this brought with it. At the same time there was a sense of excitement and apprehension. This would be the biggest match I had ever played, in front of a full house of over 2,000 spectators and with more noise than I ever thought possible at a squash match. The feeling of knowing that they were cheering for us and the elation and pressure that this brought is something that’s difficult to explain or comprehend. The noise the previous day against India had been almost overwhelming but that was at 11:00am on a Thursday morning. This was 7:00pm on a Friday evening and the crowd appeared to be keen to let their hair down after a hard week at work! 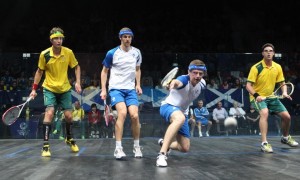 Despite all this, my biggest fear was potentially letting my partner down. He’d demonstrated what he was capable of against India and although I hadn’t played badly, I knew that, for us to successful, I needed to lift my game to create more of the situations that he could take advantage of. The last thing I wanted was to walk off court feeling like he’d been prevented from achieving what he’s capable of because I hadn’t played my part. This is rare in squash… for the majority of events we’re an individual sport, accountable only to ourselves. Having the added pressure of a team-mate relying on you is something we only experience in doubles and at major team events such as the European or World Team Championships. For some, this pressure can be crippling but I was confident I could channel it to bring out the best in me. 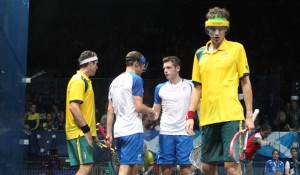 In the end we lost 11/9 11/5, having held our own all the way through the first game and up to 5-all in the second. The Australians then broke clear with 3 quick points courtesy of a couple of “lucky” bounces and a perfect winning length by Pilley. Three more points to the Aussies followed and before we knew it our Commonwealth Games adventure was over…

In all honesty, I don’t actually remember much about the match. I’ve watched the video and a couple of rallies seem vaguely familiar but my memory is strangely blank. What I do remember is the constant battle I had to fight between appreciating the occasion, soaking up the atmosphere, enjoying the experience… and letting none of that distract me from what I had to do on court. 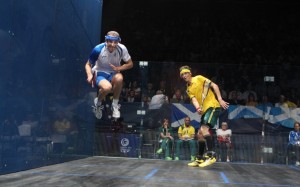 One of the benefits of experience is an appreciation that things like the journey to the Games and the competition itself are extremely special but equally rare. When you’re young, you have a tendency to take success for granted. Every new experience is greeted with the expectation that it will be the first of many. In my case, I knew that this would be the biggest moment of my career – unless we won, in which case the following day would take that honour! After 22 years, this was it. I knew that I had to take it all in and enjoy the moment while also acknowledging that I had a critical job to do. These two concepts aren’t naturally compatible but, in hindsight, I think I got the balance about right. 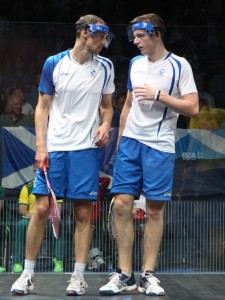 Although I have written about the many pressures, fears and doubts that existed and highlighted some the potential failures that we’d managed to avoid rather than concentrating on the positives, I suspect most elite athletes can identify with this. This may surprise those who’ve never experienced elite sport and who may assume that the best athletes are driven by their desire to succeed. In reality, the majority of top players have a far greater loathing for failure. The joy of success is fleeting, temporary, sometimes even unfulfilling, certainly in comparison to the torment of defeat and the endless search for answers that it can bring.

So that was it… the highlight of my squash “career” (some would say life!) was over. In most tournaments, your final match is either one of complete elation if you win or disappointment if you lose. This was neither. My only disappointment was that our Games experience was now over. We’d given everything, played as well as we possibly could on the day and probably the best we had played together in the nearly 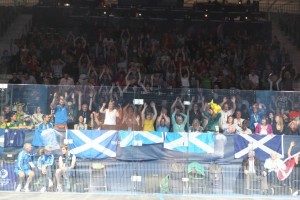 2 years that we’d been preparing for the Games. We’d come up a little short against possibly the best doubles team in the world but we hadn’t underperformed. We hadn’t let each other down….we’d simply been beaten by a better team.

Glasgow 2014 has left me with enough memories to last a life-time but my biggest sense of pride is that I was part of the most successful Scottish team in history and was privileged to experience the support of the entire country on home-soil at such a memorable event. Nothing will ever take that away from me and for that, I’ll be eternally grateful.

East Senior Ranking and Junior B 2014

SCOTTISH SQUASH AND RACKETBALL MASCOT COMPETITION WE HAVE A WINNER!
Scroll to top
This website uses cookies to improve your experience. We'll assume you're ok with this, but you can opt-out if you wish.Accept Reject Read More
Privacy & Cookies Policy
Necessary Always Enabled