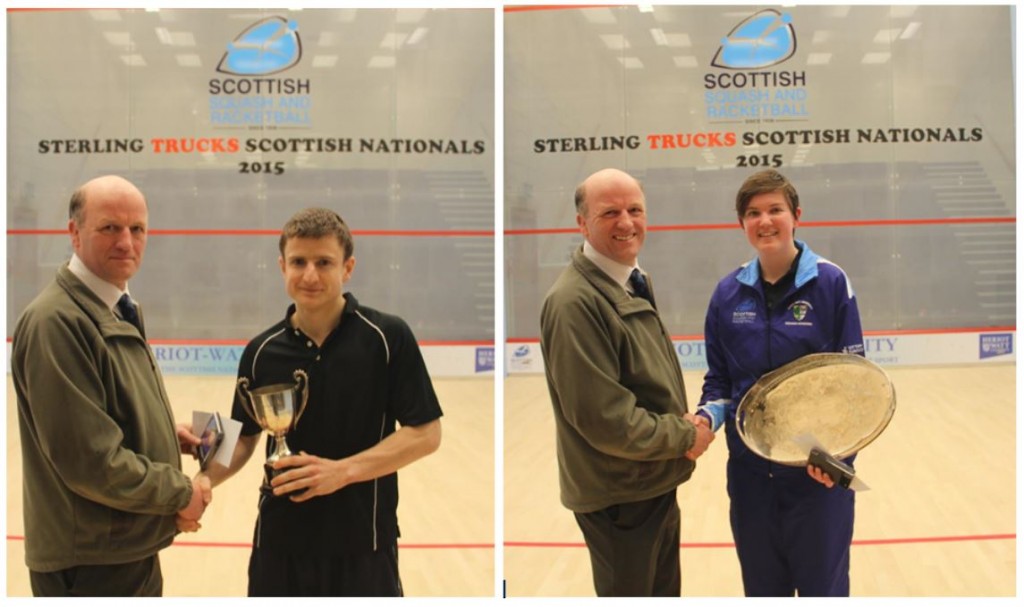 The 2015 Sterling Trucks Scottish Senior Nationals brought in a new era when Claire Gadsby along with her cohort of fellow junior players overcame their older and more experienced top seeds to finish at the top of the order in the Women’s Championship.

Claire narrowly defeated Kirsty Lobban in their first round-robin match 11/9 in the fifth to then go through the event undefeated to win her totally unexpected first Senior National Women’s title after finishing 4th at the Scottish Junior Nationals just 4 weeks ago.

In the Men’s event, a fascinating day’s squash saw the top 4 ranked Scottish men competing for the title while remaining places in the Scottish Men’s Team for the European Teams Championships next month were up for grabs in the play-offs for the 5-8 positions.

No.1 and 2 seeds Alan Clyne and Greg Lobban defeated No.4 and 3 seeds, Kevin Moran and Dougie Kempsell in three games  with the scores belying the quality of the squash on display. In the meantime, Jamie Henderson overcame a spirited challenge by Aberdeen’s Graham Melvin 3/0, while Rory Stewart defeated Stuart George in a highly entertaining 4-game match to put themselves into the final.six.

The final play-offs saw a massive to-and-fro 5-game win by Jamie over Rory for 5th and 6th place, Dougie winning a tight 4-game result against Kevin for 3rd and 4th and then Alan defeating Greg 3/0 to earn his 5th National Men’s Championship.

Alan, on behalf of the players acknowledged the support of Sterling Trucks for their investment in the sport and also recognised the growing threat of the younger players benefiting from the world-class SSRL Performance Programme.