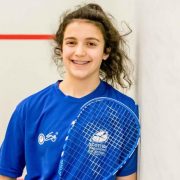 ALTHOUGH Georgia Adderley denies it, she is clearly one of those people who is good at every sport she does.

The 16 year-old is Scotland’s most promising squash prospect but not content with being an internationalist in just one sport, the teenager has also been capped in football.

Adderley switches seamlessly between the two sports; earlier this month, she became Scottish under-17 squash champion, this week she has been part of the Scotland under-16 football team which is taking part in the Uefa Development Tournament in Edinburgh while next weekend, Adderley will be back on the squash court playing in the Scottish Senior National Championships.

It was Adderley’s performance in the Senior Squash Nationals last year which really caught people’s attention; having just celebrated her 15th birthday, she reached the final against all odds, ultimately losing out narrowly to Clare Gadsby for the title.

With the teenager from Edinburgh currently in good form, she goes into this year’s championships with a very real prospect of improving on her runner-up spot from last year.

“I’m excited about the Nationals – I really wasn’t expected to get to the final last year and then it ended up being a very tight game,” she says. “But it was great to get to that stage and so I’m really looking forward to this year’s tournament.

“I’m playing well – I was really happy to win the junior nationals, especially because I went in with a lot of pressure on me but I managed to do all the right things.”

Adderley had better get used to coping with high expectations; despite her tender age, she is being talked about as having the potential to do something special as her career progresses.

“I think it’s exciting that people are talking about me in that way but I just want to work hard and see where that takes,” she says.

“It’s always tougher having pressure on you but I just need to focus on playing on my own game and I think I’m getting better at doing that.

“People probably do have higher expectations of me now but I need to get past that and not focus on anyone else – I just need to stick to my game plan and not let other people get into my head.”

Competing at elite level in both squash and football means that Adderley’s training schedule is something to behold, especially for someone who is still at school.

A typical week for the teenager includes three football sessions, four or five squash sessions and two strength and conditioning sessions but Adderley remains remarkable undaunted by her workload.

Rather than considering playing two sports as a hindrance, she believes that, in fact, it keeps things fresh.

“I think playing two sports makes you enjoy them both more – a lot of people play only one sport and by the time they’re 17 or 18, they’re fed up with it so I’m going to keep going with both until I really can’t do that any longer,” she says.

“But the main thing is that I absolutely love them both and I think that enjoying what I do is the most important thing.”

Adderley is cognisant of the fact that eventually she is likely to have to make a choice between squash and football but until that time comes, she is adamant that she will continue being a two-sport specialist.

It is in squash, however, that she may be on the cusp of making a major breakthrough.

With qualification for the 2018 Commonwealth Games already underway, it is not outwith the realms of possibility that the teenager could force herself into Team Scotland for next year’s event.

And although Adderley remains coy about the prospect of making her Commonwealth Games debut in Gold Coast in just 14 months time, her rapid improvement suggests that it is far from an far from unrealistic prospect.

“The Commonwealth Games are an amazing event and it would be brilliant to get selected but a year is a long time and a lot can happen,” she says. “I would absolutely love to be there but all I can do is try and play well and put myself up for selection.

“If I did get selected for 2018, that would be absolutely unreal but I’ll only be 17 which is still really young so 2022 is my main goal.

“So for Gold Coast, I’ll just have to wait and see because anything can happen in sport.”