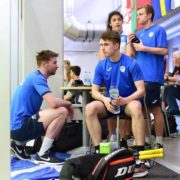 Scottish Squash are pleased to confirm that dates are now being set in November and December for delivery of the new Scottish Squash Level 1 Coaching Award. The new level 1 course aims to support candidates on to the coaching pathway and be in a position to deliver a fun, safe and inspiring session to learners.

The course has been developed by Scottish Squash with the support of Consulting Squash Coach/Tutor Paul Carter who was previously Head of Coach Development with England Squash. Paul Carter has also been identified as the National Tutor for Scottish Squash for the initial level 1 courses that the governing body is running.

Details of the November and December courses can be found below.

Further details on the level 1 course can be found here and an application to apply for the November courses is available here.

We hope to confirm arrangements and open the December course for applications shortly.