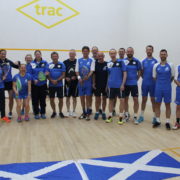 Scottish Squash will be adding two specific points to the Masters selection criteria:

Currently there is no formal process for selecting team captains but the following appears to be traditionally how they have been selected and we will be formalising this going forward.

(Reason – Scottish Squash office staff communicate with team captains and it is their responsibility to share communication with members of their team . Team Captains are also the point of call for tournament organisers during any of the event. This role is key to all teams running successfully and Scottish Squash having effective communication channels).

Scottish Squash also understands that there are various ways that selection into the teams could work. We would like Masters players to vote on their preferred option based on the below question.

Selection into men’s and women’s Scotland Masters teams that compete in the Masters Home Internationals should be set as?

Players can vote through survey monkey by clicking here.