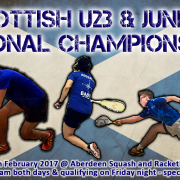 There was relief all round when two hillwalkers were rescued earlier today from a mountain summit near Braemar, Aberdeenshire. “We were just so desperate to get to the Scottish Junior National Squash Championships in Aberdeen this weekend,” they said. “So we took a few risks.”

The event at Aberdeen Squash & Racketball Club – which starts on Friday evening – does, indeed, promise to be exciting. With over 100 entries from across Scotland (and even beyond, with a few Scottish-qualified players coming from furth of the border) the scale of the competition looks to be testament to the developing Scottish Squash success story.

“It’s great,” said Tournament Director Allan McKay, “to have the excellent ASRC as our venue again. Because the Junior Nationals are traditionally combined with the National Under-23 Championships, the logistics are a challenge. But we are confident we can cope, and a great weekend’s top-quality squash will result.”

The country’s top clubs are in competition, just as much as the individual players. Even the youngest age group, Under 11, has two intriguing head-to-heads: ASV’s own Connor Murray vs. Bridge of Allan’s Bertie Wood, and Lily Craig-Gould of Inverness vs. Strathgryffe’s Orla McDougall.

At Under 13, a difficult one to call, Findlay McDougall will be looking to upset Giffnock’s top seeded Huzaifah Ali, while Rory Richmond (Edinburgh Sports Club) and Ben Barron (Nairn) will be keen to make life hard for the West of Scotland contingent. Another East-West clash could transpire when Newlands’ pocket dynamo Jemma Young faces Edinburgh’s determined Jessica Shaw.

The Under 15s – as ever, a big category – will be interesting. Dark horse Harry Little (Newcastle), Ben Orr (Crieff), Ruadhri McDougall – another one from that busy family – and Andrew Glen of Glasgow Academy among many strong entries. In the Girls’competition, Orla Young of Newlands, Europe’s top player, will be confident, but you can never underestimate the battling qualities of Crieff’s Lucy Murchie or Strathgryffe’s Beth Moglia, with Giffnock’s Oonagh O’Sullivan among other tough competitors.

But the biggest event will be the Under 17s, assuming they all get through the cold wind and rain for Friday evening’s first round. While Alasdair Prott (Inverness) appears the stand-out, the huge entry means more matches, more pressure, and an increased possibility of upsets to seedings and rankings. There are several highly experienced players in the age group just now, from Chris Murphy (Giffnock) to John Meehan (Strathgryffe), Fraser McCann (Newlands), Daniel O’Sullivan (Giffnock), Jack Orr (Crieff), Andrew Hill (Colinton) and James Dougan (Bridge of Allan). And Nairn’s Harry Barron, back after injury, will be doing his best to frustrate. On the Girls’ side, the remarkable senior exploits of Edinburgh Sports Club’s Georgia Adderley make her favourite to win the Under 17 title, but there are capable opponents.

At Under 19, Watsonian James Taylor, Inverness’ returning maverick Ross Henderson, the mercurial Tino MacKay-Palacios of Kinross, and the athletic Nathan Sharp of Aberdeen will challenge Newcastle’s Jamie Todd, who represented Scotland in the European Under 19s last season.

The National Under-23s will see Heriot-Watt players Martin Ross and Kyle Gribben, who formerly played from Inverness, contest the title with Rory Stewart, Craig Valente-Wallace and Pietro Gagliardini of Edinburgh Sports Club. Rory’s fine recent form in the British National Under-23s and the Edinburgh BSPA event make him a favourite here, but he will have to fight for every point in this company. With Claire Gadsby and Carrie Hallam nursing recent injuries, Elspeth Young, fresh from strong performances in that same BSPA event, faces off against fellow Aberdeen National League player Katriona Allen and Dalgety Bay’s Edinburgh University player Catherine Holland.

As Allan McKay commented in advance of the tournament: “We’re very excited about this. After the success of the Scottish Junior Open, and Rory Stewart’s fantastic win in the British Under 23s, the Edinburgh BSPA event last weekend was a great marker of progress. Not just Alan Clyne’s excellent victory, retaining his title, but also the succession of young Scots players qualifying for the main draw, and then performing with great credit. So things are really buoyant in Scottish Squash. It’s all about building pathways, enabling clubs, players and coaches to develop through a supportive and positive ethos. We hope the Junior Nationals and Under 23 Championships will both challenge and inspire.”