The inaugural Scottish Junior Doubles Open took place at Scotstoun on Saturday, 20 December. The event was held on the same courts that hosted the Commonwealth Games this summer and was the first opportunity that junior players have had to compete on a CWG specification Doubles court, including 13″ tins.

The event attracted a high quality field with almost all of the top juniors in Scotland competing for the three titles on offer – Boys, Girls and Mixed. 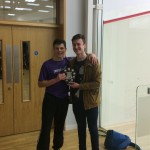 In the Boys event, top seeds and overwhelming favourites Rory Stewart and Craig Valente-Wallace cruised to the final with relative ease before suffering a surprise defeat at the hands of Ewan Hearns and Ross Henderson. With Rory and Craig ranked No.1 and 2 in Scotland at U19, it served as yet another example that the best singles players don’t always make the best doubles team. Mark Coyle and Harry Anderson won the 3rd place play-off against Giffnock club-mates Patrick O’Sullivan and Jonathan Brady. 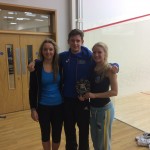 Kirsty Lobban and Carrie Hallam won the Girls event with a hard-fought win over Claire Gadsby and Katriona Allen. After dropping the first game, Kirsty and Carrie levelled the match before a tense final game ended with perhaps the best rally of the day at 10-9 in the decider – with Kirsty diving half the length pf the court to keep the ball in play before getting up to hit a spectacular winner about 10 shots later! Emma Fitzsimmons and Georgia Adderley finished 3rd. 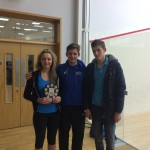 Kirsty collected her second title of the day in the Mixed event, partnering Rory Stewart to victory. In what looked to be the most open event on paper, Kirsty and Rory ran out comfortable winners as they secured the title without conceding a game, beating Elspeth Young and Craig-Valente-Wallace in the final. Carrie Hallam and Ewan Hearns were 3rd, with two 13-year-olds (Georgia Adderley and Alasdair Prott) performing exceptionally well together to finish 4th.

It is already expected that the success of the event will see it return as a regular fixture on the calendar in 2015.”