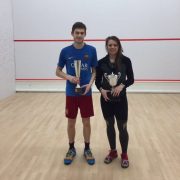 Edinburgh-based squash player Rory Stewart claimed the biggest title of his career after winning the British Under-23 Open at Roehampton. The 20-year-old stunned English top seed Joe Green in four games in Saturday night’s semi-finals and fully capitalised on that by defeating Pakistan teenager Kashif Asif in the final At 6ft 4in tall, Stewart towered over his 5ft 8in opponent and controlled proceedings on his way to an 11-7, 11-0, 11-8 victory.

Stewart said: “I’m delighted to get this victory. It’s right up there with being selected for the European Team Championships last year. “I was seeded to make the quarter-finals, so to go all the way is a big boost ahead of a busy few weeks.” Stewart will be back on court at next weekend’s Edinburgh Sports Club Open, where he faces Essex teenager Aaron Allpress in round one on Friday.