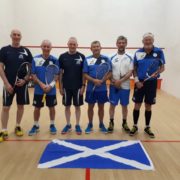 The team assembled in Nottingham for the MO40s on what turned out to be a lovely and warm sunny day. The squad were aware of the challenge ahead having seen the teams presented by the other Home Nations in what is now a very competitive age group with Ireland having ousted English dominance for the past number of years, unheard of really in Masters Squash where the English squads are usually so dominant aside from the occasional upset year.

After check in, room allocation, a light hit on some of the practice courts and captains meeting play commenced. Scotland were to play Wales in the first set of fixtures.

On first was Blair Mckenzie against the fabulously named New Zealander Dallas Hayvice. Blair got off to a nervous start, was two love down, played well in third and fourth to come back to two all and then small margins let him down in fifth to eventually go down 3-2. Great and very competitive game however. Next on was captain Barry Masson. Barry played well in the first but was clawed back and beaten in the next 3 to lose 3-1. Two nil down and three wins out of three required from rest of the team. Tough ask!! On next was Peter O Hara who swiftly dealt with the Welsh Number 1 Paul Johnson 3-0 to bring things back to 2-1. John Kynoch was on next at 4 and despite being competitive in all games was beaten 3-0. Grant Gray was on next in a dead rubber against Wales’ arguably strongest, most tanned and best groomed player Lloyd Forkan. Three very close games with the final one going to tie break saw Grant lose 3-0 and the team lose 4-1, however more worryingly Grant struggled to walk off court and up to the bar with a recurrence of a hamstring injury. Wales 4 Scotland 1.

Saturdays morning against England was always again going to be tough. Grant had to pull out of the English tussle and the rest of the event which meant everyone moved up one, a tough job made even tougher!! Debutant Scott Hay was on first at 5 and after a nervous start settled to play well eventually losing out 3-0. John Kynoch was on next and was beaten by England’s John Gallacher 3-0. Next on was Peter O Hara who won 3-2 in a passionate and vociferous encounter against England’s Jamie Goodrich. So 2-1 down with 2 to play. Blair Mckenzie was on against Christian Donelan and played well to get two game balls in the first game which unfortunately couldn’t convert. Fine margins in the next two games losing to 9 and 8, not too far away again! Last on in a dead rubber now was Barry Masson against Ashley Bowling. Tough match for Barry with Ashley showing him all corners of the court. A hard 3-0 but Barry would have felt for the effort and work that he put in he should have had something to show for it. England 4 Scotland 1.

Onto the afternoon session against Ireland. Having beaten both England and Wales, Ireland needed to win convincingly against Scotland to retain the MO40s title so were very focussed on doing so. To set the scene the Irish Men’s O40 team had 1 current International Player and 3 former International players. A slightly different make up to our squad.

Scott Hay was on first at 5 and played well against an unorthodox opponent eventually going down 3-1. Same scoreline for John Kynoch (3-1) and Blair and Barry losing 3-0 to opponents who simply were better – both were ex Irish International players – no complaints. The match of the day / tournament however came with Peter O Hara playing Steve Richardson (current Ireland International). A fantastic game of squash played in a good competitive and sometimes argumentative (towards the ref) spirit saw Steve Richardson win 12/10 in fifth to prevent Peter on taking what would have been a very good win. A couple of marking decisions at key times in the match either way would have made the difference. Ireland 5 Scotland 0.

So the MO40s team finished a close 4th in 2017. Someone has to. The results and scores showed that we were not too far away and were competitive in all the fixtures so here is to next year for those of us that still qualify and a target to get fitter and more competitive for Scotalnd in 2018 where the MHI will be held on home turf.

A few pints were had in the Notts Squash Club bar and then back to the hotel to change and head for dinner and prize giving. A great night was had by all and despite finishing 4th the Scottish MO40s had the most people left in the bar at 4am on the Sunday morning. Potentially I can see the problem here………!!!

Thanks to Notts Squash Club, England Squash, Dave Harden, Adrian Wright, Alison Goy and all those that assisted and marked throughout the weekend. The set up at Notts Squash club and proximity of the hotel made it a very enjoyable event and weekend as a whole.

The team and supporters travelled down to Nottingham for the weekend of 5/6th May.

The English had put us up in the lovely St James hotel in the centre of town.

After check in and captains meeting play commenced, first up was the Welsh. Jim Dougal got us off to a fine start, with a mixture of drops and deceptions ran out a 3-1 winner. The youthful Paul Harris   just back from his successful European squash masters had a comfortable 3-1 victory as well. Robin Ridley on at 1 sealed the match with a comfortable 3-0 result. Perhaps the upset of the match next as John Rae went on at no 4, winning the first game comfortably, then mysteriously disappearing for the next 3 games, losing 1-3. Peter Shivas was on last and gave a polished controlled performance dispatching his opponent with a 3-1 result and the match won 4-1. A good start for the team.

Saturdays morning is always hard to get up for, but with the very strong English team waiting, everybody needed to be at their best. John Charles stepped in at 5, played well and with a bit more craft could have taken a game, losing out 0-3. Paul on at no 3 was up against the recent British champion, who has a lovely range of deceptive shots. Paul kept in the game and against a tiring Ruston picked up the 3rd game. We all thought this was Pauls chance to close it out, but Ruston wasn’t champion for nothing and completely changed his game in the forth and went on to win 3-1.

Robin Ridley up next against the abrasive Mark Cowly, who has won everything in English Squash for the last 10 years .Ridley took the first game much to the surprise of the English supporters. Mark then changed his game and powered his way over the next 2 games. Responding well to the pressure Ridley picked up his game and won the forth, the final game was a to and fro with mark proving to powerful on the day taking it and the win 3-2. John and Peter played well in patches against their English opponents, but didn’t manage to take any games. Final score 5-0 to the English, but we at least took more games of them than the other nations.

The afternoon session against the Irish was quickly upon us. A win here would at least give us 2nd place. Jim Dougal back in at 5 was hoping to set the ball rolling, but unfortunately had a game he would like to forget, enough said. Paul up next and quickly put the team back on their winning ways. Ridley went on against the fresh Irish no1, went out quickly into a 2-0 lead and managed to hang on for a 3-1 win. John Charles promoted to 4 had a great game being faster and fitter than his Irish counterpart and won comfortably, putting us in a 3-1 winning situation. Peter Shivas on last at 2 put the icing on the cake, with some lovey squash with a range or drop shots his opponent couldn’t reach or match. A good win and a 4-1 winning score line, putting us into 2nd place in the rankings.

We retired to the hotel for a few bottles of prosecco, before the evening’s dinner and presentations .The St James hotel set up a lovely meal with the wine and drinks never ending. Highlight was the Irish men’s over 40s team giving us all a very stirring song as they collected their trophy for winning all 3 of their matches.