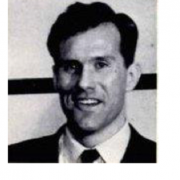 Michael ‘Mike’ Oddy was an Edinburgh Sports Club member and an outstanding squash player of his generation. H was one of the game’s leading players in the 1960’s, playing in an era where the sport was dominated by great players from Pakistan (such as Azam Khan, Roshan Khan, Mo Khan and Aftab Jawaid) and Egypt (such as A.A. AbouTaleb and Ibraham Amin). Mike was one of the few British players to mount a consistent challenge to the Asian and African players of his era. He was runner up to A.A. AboutTaleb at the 1964 British Open (which was considered to be effective world championship at the time), and won the British Amateur Championship in 1960 and 1961.

He was born in Hawick, Scotland and after Rugby School joined Ballantyne Knitwear, which became part of Baird Plc. He moved Leicester to take up the role of Managing Director at Pantherella Fine English Socks, taking the business public onto the USM and then through its sale to Great Universal Stores (GUS Plc) before retiring.

Mike’s squash career began when he told he was not allowed to play rugby because he had only one kidney. For a lad from Hawick that must have been a bitter blow. He joined ESC in the early 1950’s, and quickly made his mark, becoming the Scottish Junior Champion, and then in 1956 Senior Champion while still only 18, a Championship he won a further four times. He won his first Scottish cap in 1955, and represented his country 35 times. He was ESC Champion in 1956 and 1957. He was only 27 years old when he retired from major competitive squash in 1964 due to ill health and pressure of work, but in his five years as Britain’s no 1 player, he became Champion of New Zealand, Australia and South Africa, and was ranked no 2 in the world.

Mike was a key member Scottish team who at ESC in March 1964 inflicted a first victory against England since the fixture commenced in 1930. Indeed no home country had previously prevailed. The photograph above shows the assembled victors, and Mike is joined by fellow ESC members Olly Balfour and Ian de Sales La Terrière, both of whom still regularly visit the Club. All three were made honorary members.

Despite being unable to attend the Club’s 75th Anniversary dinner in 2011, Mike provided a generous tribute; “Among the Club’s outstanding attributes is its friendly atmosphere and extraordinary hospitality. I knew many international players of the years and became used to their universal praise of their visit to Edinburgh and the Club”.

He had a lifelong passion for flat racing, never missing a King George race day at Ascot for 59 years. He was delighted that when through his membership of the Royal Ascot Racing Club he had a share in the Derby Winner Motivator in 2005.