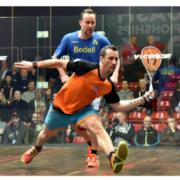 Scottish Squash & Racketball (SSRL) met with the Masters Sub-Group, which included a group of Masters representatives from the full range of age groups, geographic regions and both male & female players and a review of the Masters competition structure was carried out. Following a wide ranging discussion the Masters Group agreed to make the following changes for the coming season:

The Masters ranking points were also discussed and whilst we are looking into whether we can use SportyHQ to deliver these for the coming season it was agreed that ranking points would remain in the same format currently in place.
All of the above is in agreement with the Masters sub-group for one season. These changes will then be reviewed at the end of the season. SSRL are now working on confirming the regional Masters competition dates which will be released shortly.
Taking on board the above changes, the Masters competitions will now take place on the below dates. Once the Scottish Masters Nationals have been awarded to a region we will be able to confirm which region will host their Regional Masters Competition on the below dates.