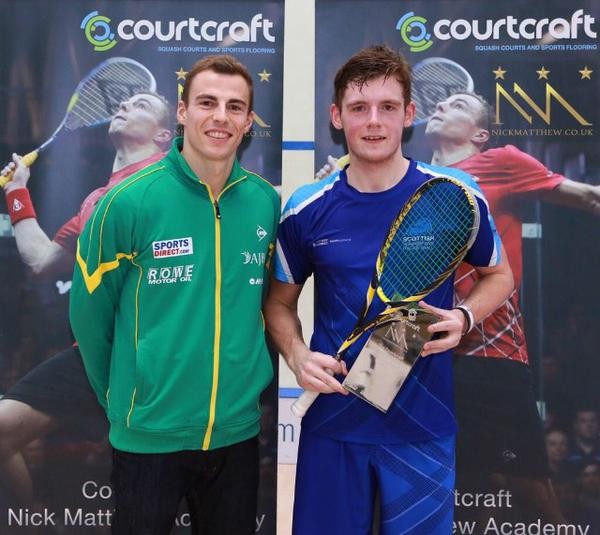 Greg Lobban won his fifth PSA Tour title, claiming the Nick Matthew Academy Steel City Open in Sheffield. Greg came into the event as the top seed and looking to continue his fine run of form in recent events.

After a straight-forward first round win over Micah Franklin (Ber), he faced the tenacious Mark Fuller in the quarter-finals. In what turned out to be his toughest match of the weekend, Greg eventually came through 11/8 13/11 10/12 11/6 after 72 minutes of gruelling action.

The semi-finals saw Greg up against Mark’s younger brother, Chris Fuller, who had defeated Kevin Moran in the quarters to prevent an all-Scottish semi-final. This time Greg enjoyed a more comfortable win as he controlled proceedings to progress to the final 11/5 11/5 11/7.

His final opponent was current British Junior Champion, George Parker, who had upset the No.2 and No.4 seeds on his way to the final. Greg again controlled the match from the start, using the front court to excellent effect. After a close start to the first two games, he eased clear to win 11/6 11/5 11/4 and claim his 3rd PSA title in 2014.

Greg now has one final event left in 2014 when he joins Alan Clyne in qualifying for the British Grand Prix in Manchester this week. Both players get underway on Wednesday (3 December), with Greg facing former World No.12, Tom Richards and Alan playing local entry, Alex Noakes.