Scottish No.2, Greg Lobban, won his fourth PSA World Tour title on the weekend when he took out the Indian Summer Securian Open in St Paul, Minnesota, USA.

After defeating World No.47, Campbell Grayson in the qualifying final of the US Open in his previous event and then performing well against the No.2 seed (and new World No.1), Mohamed Elshorbagy, he took excellent form into this event where he was seeded No.2. 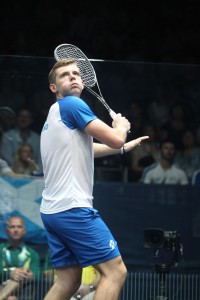 Playing with confidence, he saw off Cameron Stafford of the Cayman Islands in the first round, USA’s Adrian Leanza in the quarter-finals, then the dangerous Australian, Zac Alexander, in the semi-finals before dismissing the No.1 seed and USA No.1, Julian Illingworth, in the final – all 3-0.

Afterwards he commented: “…Played well all week… got a lot of confidence in my squash at the moment and feel like I’m backing myself to reach every ball and make the right choices. I felt physically stronger than my opponents and the only way I was going to lose was if I beat myself…“.

He moves on now to Chicago for the Life Time Chicago Open where he is seeded No.5 and up against Switzerland’s Benjamin Fischer in the first round.