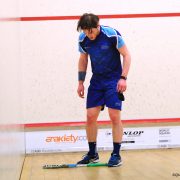 Douglas Kempsell has already turned his attention to this month’s Edinburgh Sports Club Open after missing out on a hat-trick of PSA titles when his ten-match unbeaten run came to an end in the semi-finals of the Open du Gard in Nimes, southern France. The 23-year-old won back-to-back tournaments in Niort and Berlin shortly before Christmas, but top seed Jens Schoor halted his winning streak in Nimes. The German had the benefit of an easier quarter-final earlier in the day, while Kempsell battled past Czech fifth seed Martin Svec, although the result might have been different if the Scot had managed to convert leads in the second and third games.

Third-seeded Kempsell led 9-7 in game two and 10-5 in the third but was unable to capitalise as Schoor eventually went through 11-7, 11-9, 18-16. “All good things must come to an end,” shrugged Kempsell, who was also nursing a minor foot injury. “It wasn’t a terrible result and it’s onwards now to the Edinburgh Open at the end of the month.”