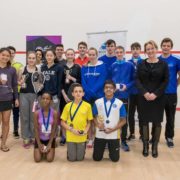 Entries are now open for the 2017 JC Lindsay Scottish Junior Open in Edinburgh.

This seasons competition will run from Thursday 28th December – Saturday 30th December 2017 at Edinburgh Sports Club and The Grange Club in Edinburgh. To find out further details around the event and to download an entry form click here. This seasons event also sees the introduction of an under 11 category for both male and female players.

Scottish Squash & Racketball are extremely delighted to announce that JC Lindsay have confirmed they will sponsor the event for a second year with Eye Rackets being a key partner in the successful delivery of the 2017 competition.

Scottish Squash & Racketball’s National Coach Paul Bell said: “The Scottish Junior Open is a rare opportunity for all the Scottish Squash players to compete at such a high level on home soil.  The event is going from strength to strength and we hope by moving the date to before the British Junior Open will encourage even more of the world’s top juniors to compete.  Scotland is on the rise in terms of junior squash and the opportunity for our young players to test themselves against the worlds best will provide a great indicator of just how far they have come.”