Scottish players returned from the Irish Junior Open in Dublin with 3 titles and 8 podium finishes this past weekend. Elspeth Young (GU19), Richard Hollins (BU17) and Georgia Adderley (GU15) were the winners, ensuring the Scottish squad claimed 3 titles at an ESF junior circuit event for the first time in history. 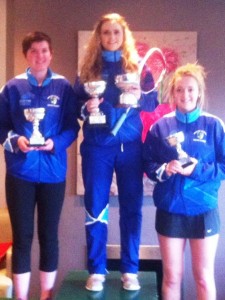 Scottish success was already guaranteed at the end of Day 1 when Claire Gadsby, Kirsty Lobban and Carrie Hallam all won their respective first round matches in the Girls U19 event to join top-seed Elspeth Young in the semi-finals, thus guaranteeing a clean sweep of the podium – another first for Scottish Squash. In the end, Elspeth justified her seeding by beating Kirsty 3-1 in the semi-finals and Claire 3-0 in the final to secure the biggest win of her junior career and her first ever ESF title after 2 previous final defeats.

Kirsty beat Carrie 3-1 in a high quality 3/4 play-off where 3 of the 4 games went to a tie-break. It was a welcome return to international squash for Kirsty after taking a year out from the sport last season and was a clear demonstration that this quartet is more than capable of filling the void that currently exists in the Scottish senior women’s team. 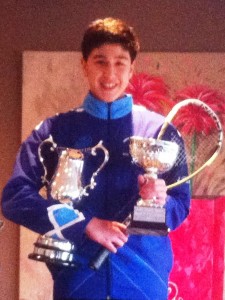 Richard returned to defend the U17 title that he won last year and looked like the class act in the event all weekend. Showing a more mature style of play and looking more focussed than in previous years, he was never seriously troubled at any stage of the event, winning the title without conceding a game after beating Aidan O’Brien (Eng) in the final. Patrick O’Sullivan finished 4th after a superb comeback in the quarter-finals when he fought back from 2-0 down to beat the higher-seeded Ryan Wilson (Eng) 6/11 8/11 11/9 11/7 11/3. Ross Henderson lost a tough first round match to Aidan 3-1, before finishing 10th overall.

Perhaps the biggest improvement over the past 12 months, at least on the evidence of this weekend, belonged to Georgia Adderley. After comfortably progressing to the semi-finals, Georgia faced Sophie O’Rourke, who had beaten her 3-0 at the U15 Five Nations back in March. A tight opening saw the first 2 games shared (both on tie-breaks) before Georgia recovered from losing the third to win 15/13 10/12 2/11 11/4 11/2. The final was a repeat of the Under 13 final last year, 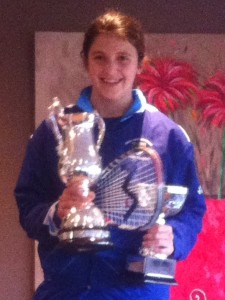 against Ellie McVeigh, which Ellie won 3-0. On this occasion the match was similarly one-sided but this time in Georgia’s favour, a remarkable turn-around in only a year.

Rory Stewart was another player to avenge a recent defeat in the Boys U19. After finishing 6th at the British Junior Championships at the start of the month, Rory was looking for his best finish at an ESF event for a number of years. In the quarter-finals he faced Belgian No.1, Tiago Goriely, who had beaten him 12/10 in the fifth at the European Championships back in April. The match went to a fifth once more but this time it was Rory who emerged victorious with a 11/9 8/11 11/8 1/11 11/5 win. The semi-final saw him win 3-1 in a scrappy match with Dan Bergin (Wal). In the final he found the steady play and clinical finishing of Michael Craig too much to handle. Despite the rallies being well contested, Michael always had the upper-hand and secured a comfortable 3-0 win. 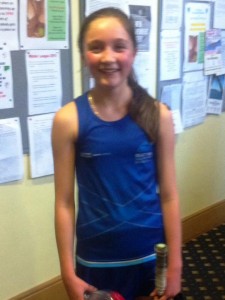 Another player to lose out in the final was Orla Young in the Girls U13 event. Orla and her sister Gemma had travelled to Dublin independently and after Gemma qualified for the top 16, they drew one another in the first round! Orla got the better of the sibling rivalry and progressed to the final where she faced English No.1, Lucinda Cross. An extremely respectable performance saw her lose 11/8 11/6 11/9 but with almost 12 months difference in age, it would be no surprise if Orla was to follow Georgia in beating these opponents when they next meet. At only 10 years old, Gemma also demonstrated her potential, winning 3 out of 5 matches to finish 10th.

Emma Fitzsimmons did enough to suggest that she is another player with a bright future ahead, adding even more depth to our current crop of junior girls. She was unlucky not to force a decider against eventual champion, Maria Gonzalez Velazquez (Spa), in the semi-finals but recovered well to win the 3/4 play-off to ensure that Scotland had at least one player in the top 3 of all the Girls events. 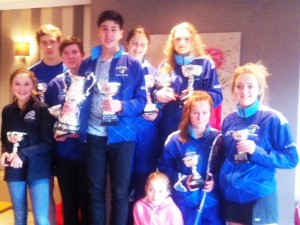 In the Boys U15 category, there were more promising signs from several players. Alasdair Prott finished 4th to record another high finish at an ESF event but perhaps the standout performance (from a Scot) in this event came from Chris Murphy, who fought back from 2-0 down against 2nd seed Scott Gillanders in the quarter-finals to lead 9-3 in the fifth. Unfortunately that was as close as he could get as Scott suddenly decided to stop making errors and eventually won the match 3-2. Chris went on to win his remaining matches 3-0 to end the event in 5th.

Jack Orr and James Dougan were the only members of the National Talent Squad who were selected to travel to Dublin – the remaining members all being HWU Academy players – and both acquitted themselves admirably. James lost to Scott (Gillanders) in Round 1, while Jack went out 3-1 against Todd Gowdy (who Chris beat in the 5/6 play-off). After this they progressed to the “plate final” (9/10 play-off) where James was able to get the better of 2 close games to win 11/7 12/10 12/10.