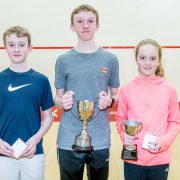 Orla, Findlay and Ruadhri McDougall all claimed a podium place at the tournament with Orla and Ruadhri becoming national champions for their respective age groups.

The trio, who train at Strathgryffe Tennis, Squash and Fitness Club, were able to use friendly rivalry to drive one another to a medal.

Finlay, 12, came up against fierce competition in the Boys Under 13 section. He shook off a defeat in the semi-finals, where he had been two games ahead but lost 3-2, to win his play-off for third place against Ben Barron. The section was won by top seed Huzaifah Ali from Giffnock.

Ruadhri, 14, came up against Scots qualified Harry Little from Northumbria in the Boys Under 15 final and the crowd was treated to a highly intense and skilful game of squash. The Houston youngster displayed battling qualities to emerge as a 3-0 winner (11/8, 11/9, 11/9).

After the match, he said: “Of course, I am really happy to have won.

It was a tough game. I was a bit nervous before the game started but I was ranked lower than Harry so there was not as much pressure on me as there was on him.

“I had never played him before so it was quite interesting from that point of view. I felt that my drop shots were coming off really well, he was not really getting them back.”

He added: “To get the title is fantastic and with my sister Orla having won before my match there was a wee bit more pressure on me to win. But, of course, I am glad that she won.