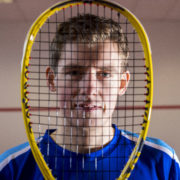 Greg Lobban is looking for an extended run at the US Open which begins in Philadelphia on Thursday as he aims to build on an encouraging start to the season.

The 25-year-old has risen six places to 39 in the world rankings this month boosted by a run to the final of the $25K Charlottesville Open in mid-September where he came up just short against Switzerland’s Nicolas Müller.

Lobban flew straight to San Francisco the next day and got through the first round of qualifying at the $100k Oracle Netsuite Open before losing to doubles partner Alan Clyne in what was his sixth match in six days.

After some downtime and a training block in New York, Lobban arrived in Philadelphia on Tuesday along with Clyne ahead of the $165K US Open being staged at Drexel University.

“The US Open is one of my favourite tournaments of the year,” Lobban said this week before his final training session in New York.

“I have good memories from two years ago when I beat Max Lee who was 15 in the world at the time, one of my best results on tour.

“There’s always a good atmosphere around the tournament, lots of student activity and with the US Junior Championships running alongside, you tend to get good crowds on all the courts.”

He continued: “I will have to play well to get into the main draw but that’s what I’m looking to do and then progress further. 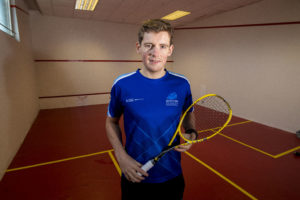 “I don’t want to just get through qualifying, I want to get into the second round and quarter-finals of these big events and make an impression.

“I am up six places in the world rankings but even though that’s progress, I wasn’t that happy because I want to push higher up the rankings. Doing well in Philadelphia would obviously help my cause.”

Alan Clyne also received a rankings boost this month, moving up to his highest ever world ranking of 25, aided by his 71 minute win over four games against Lobban at the Oracle Netsuite Open.

Reflecting on that match and his run to the Charlottesville Open final, Lobban added: “It was a really positive couple of weeks and I was competing in my biggest final to date in Charlottesville.

“Whilst I was disappointed to lose in the final, my results in the quarters and semi-finals gave me real encouragement.

“I thought I wouldn’t be physically on my game when I played Alan but I felt good. The match was tight and it could have gone to a decider.

“It’s definitely different playing against Alan. We are good friends, train together and are doubles partners but you need to try and treat it like any other match.”

You can follow Alan Clyne and Greg Lobban’s US Open progress, here.