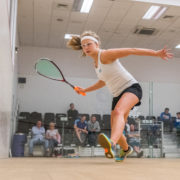 Ally Thomson is aiming to follow in her father’s footsteps.

Alan Thomson, who is Scotland’s most capped squash player, was part of the famous European championship winning side of 1992.

As a five-year-old, Ally watched on as her father played and she was hooked. Now she is making a name for herself in her own right.

Thomson lives and trains in London but her allegiance lies firmly north of the border and she will be eligible to represent Scotland early next year.

“I did play for England juniors but I have always wanted to play for Scotland,” Thomson admitted.

“Both of my parents and all of my family are from Glasgow so it’s actually only my two older sisters and I who have English accents – we are the odd ones out in the family!”

Thomson is happy to play the waiting game, confident that the switch to Scotland will pay dividends, saying: “I joined the Scottish Squash set-up in December last year but I am not eligible to play until 2018, although I’m fine with that.

“I come up to Edinburgh and train at the Oriam Performance Centre. I am more than happy to do that and, for example, help the other players prepare for doubles as I did this summer. I am only 21, I have many more years to come.

“The standard of training in Edinburgh is really helping to develop my game and I believe that Scottish Squash will help further my career because of the events it will allow me to play in.

“Obviously at the bigger events you play the better players and that makes your game better.”

Thomson is making a name for herself in squash circles, and she said that having a successful father has only been positive for her development.

Alan has made more than 160 appearances for Scotland, 79 for the main senior team.

“No pressure at all,” she laughed. “To even try to get close to that number of caps would be amazing.

“As a junior, he would come to all of my tournaments with me and he is literally my biggest fan even though I finally managed to beat him about three years ago!

“It’s great to have his support and obviously he has the connections in Scotland as well.”

Last season was a successful one for Thomson as she reached her goal of climbing into the world’s top 75. She currently sits 70.

One event in particular stood out from the rest last season. 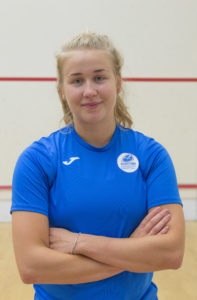 “I went out to San Francisco to play in my first 50k event,” she explains.

“I won my first match and then had to play the world number 27 (Low Wee Wern), who was probably the best player I have played so far. She beat me but I gave her a really good game.

“She had a lot more experience than me and I think that, if I’m getting this close now, in a couple more years I could be up there.”

As for next season, which begins in September, it’s a case of more of the same as she explained the importance of having a strong world ranking.

She said: “It allows you to get into the bigger tournaments which is what you want, to compete against the top players.

“For now, it’s all just about training – the more you train, the harder you work, the more wins you’re going to get.”