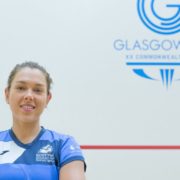 Lisa Aitken is aiming for back-to-back PSA World tour titles at the Val de Marne Open when round once begins in France tomorrow (Thursday, October 26).

The 27-year-old claimed her second ever tour title at the PwC Ladies Open in Frick, Switzerland on Sunday defeating Belgium teenager Tinne Gilis in the final 11-7, 9-11, 11-7, 11-7.

It comes just four months after her maiden tour win in New Zealand which capped off a memorable comeback in January following two years on the sidelines due to illness.

She didn’t have long to enjoy her recent success in Switzerland with Aitken heading via train to France on Tuesday ahead of her opening match in Creteil just outside Paris tomorrow. 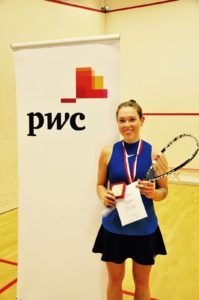 “It’s a quick turnaround for sure,” Aitken said on-route to France yesterday.

“You have that high of winning but then quickly need to get mentally prepared for the next tournament knowing you have a job to do.

“But it was great to get the win in Switzerland, especially so quickly after I won my first PSA event in June.

“Having won in New Zealand I did wonder when my next title would come so it was pleasing to get it so soon into the new season to keep the momentum going.”

She continued: “I wasn’t at my best in the first two matches last week but managed to find a way to win and get through which was important.

“I have been working on a lot of stuff recently in training with (National Coach) Paul Bell, including my movement.

“In my first two matches, instead of trying to win with a clear game plan I felt I was just trying to work on what I had been practicing on.

“But once I got through my quarter-final which went the distance I was in a better frame of mind and felt more confident in my game.

“I was delighted to get over the line in the final on Sunday.”

Second seed Aitken plays a qualifier in round one and is scheduled to face Tinne Gilis again in the latter stages before she returns to Scotland for a training block ahead of an event in London in late November and the AJ Bell PSA World Championships in Manchester before Christmas.

She added: “I will be able to watch my round one opponent play in qualifying which will be useful as well as cheer on Elspeth and I’ll get time on the practice courts. Hopefully I can go deep in the event.

“It’s going to be a long season with the Commonwealth Games obviously a big target so I am putting each part of the season into blocks.

“I was in Malaysia in early September where I reached the semi-finals of an event in Kuala Lumpur and this is my second block before it’s back to the training courts.”

Latest results from the Val de Marne Open can be found here.

Georgia Adderley makes history after winning British Junior title
Scroll to top
This website uses cookies to improve your experience. We'll assume you're ok with this, but you can opt-out if you wish.Accept Reject Read More
Privacy & Cookies Policy
Necessary Always Enabled