Scotland’s under 13 and Under 15 team have just returned from the Junior Five Nations Championship held in Lilleshall National Sports Centre in Shropshire, England. The squad were accompanied by Mark Beaumont, Brenda Young and Martin Woods.

The team travelled down by minibus the day before the event to let the players get settled into their surroundings before starting the tournament at 2 pm on the Friday afternoon. Each match was played on two courts, with the playing order being Boy 3, Boy 1, Boy 2 on the first court and Girl 2, Girl 1 on the other court.

The under 15 team were first up against Wales and Calum Carswell started us off well with a solid performance and a 3 – 1 win. On the next court, Maddie Orr was the hero of the match coming back from two games down to win in five and putting Scotland 2 – 0 with three still to play. Alasdair Prott was up next and showed his class in good style, beating the opposite Welsh number in straight games. Harry Barron had a tough match in his debut for Scotland (and 9 family members down to support!), going down to a good opponent 0 – 3, and then Orla Young fell to the Welsh No.1 in a close 1 – 3 match. However, both Orla and Harry gained valuable experience from the matches, and Orla is still in her first year of the age group and eligible for the Under 15 team again next year.

The Under 13 team were up next at 4 pm against the Irish. Our team had four out of the five players making their debut appearances at junior level for Scotland, against what we knew was a relatively more experienced Irish Team. All of the players played well but were outgunned by the Irish juniors, with Jemma Young, Finlay Martin, Hugo MacPherson and Thomas Clark all going down to stronger opponents, but our performance of the match went to Lucy Murchie from Crieff, facing a strong Irish no.1 girl and eventually going down (but not without a hard fight!) in five tight games.

Saturday saw the under 15 team face France in their first match on the glass-backed show courts. Maddie followed up on her win from the previous day with a superb performance winning 3 games to love. The French No.3 proved slightly too strong for Calum, who lost 3 – 1, putting the overall score at 1 – 1. Orla was next on against a very polished French No.1 girl, and despite trying valiantly, fell in straight games. Alasdair was next on and levelled the match at 2 – 2 with a decisive 3 – 0 win. The pressure deciding match was next up for Harry. In a very tight match which could have went either way, the French player gradually took control of the match after Harry took the first game, and eventually led the French to a 3 – 2 win against Scotland, in what could on a different day have been a win for the Scots.

The next match up was the under 13 team against the Welsh. Jemma was incredibly unlucky but played really well in the match losing in five tight games, with a similar story for Finlay who lost in four. Lucy came out strong next to bring one back for Scotland, winning 3 – 0. Hugo played well and fought well, but the Welsh took another tie 3 – 0 to seal the overall match. Thomas played so well in the final match, showing real attacking flair and fighting like the Lion Rampant, but eventually went down in four games, concluding the match and a Welsh win.

The second Under 15 match of the day was against the English on the plaster courts. John Meehan got his first junior cap of the day as Calum was rested. John, Harry, Orla and Maddie found the English players just too strong and experienced, all going down in three games, however Alasdair stood out from the crowd and took the battle to his opponent, eventually winning 3 – 1. The English may have won the overall match but Alasdair definitely showed massive future potential for Scotland.

The last match of the day was the Under 13’s against the French. The first match was a walkover victory for Jemma and Scotland after her opponent injured her ankle in a previous match. Lucy struggled to make an impact against the top French girl, and lost in three, and then Finlay lost a terrific tussle at No.3, eventually going down in three. With the French 2 – 1 up, the onus fell on Hugo and Thomas to try and pull things back – however, it wasn’t to be. Hugo lost to the French No.1 3 – 2 in a physically exhausting match  and then Thomas lost against a technically strong French No. 2. France win 4 – 1.

The last day of the tournament arrived and the players were still well up for the fight. The Under 15’s and 13’s were on at the same time, with the 15’s playing the Irish in what was anticipated to be a tight match and the 13’s against the English, who were leading the event by some distance. The 15’s had a tough match first up with Calum losing a very tight match 2 – 3, but this was balanced up with Maddie doing the business once again, winning 3 – 0. Orla played a superb tactical match beating her Irish opponent 3 – 1. The Scots were 2 – 1 up with two matches to play. Alasdair was next on court against a tough opponent in Sam Buckley, who had been known to trouble Alasdair in the past. Alasdair showed real maturity in his performance and despite having some difficult refereeing decisions, pulled through 3 – 1 to seal the win for the Scots with Harry still to play. Harry played well, however just couldn’t take the final step and lost an epic encounter in five. The Under 15’s finished in 3rd place, which on a different day could easily have been 2nd. All in all a good performance, especially from our No.1 Alasdair, who got through the weekend undefeated.

The Under 13’s had a much different experience on the plaster courts, playing the no.1 seeds England. Despite the team fighting hard, the English overwhelmed our young team to take the overall title and our team finishing 5th, however all of our players gained so much experience and stuck together as a team that they will have learned much from the weekend.

Both the coaches felt the weekend was a positive for the Scottish players and can only bode well for our younger players developing in the future. 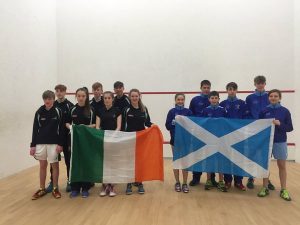 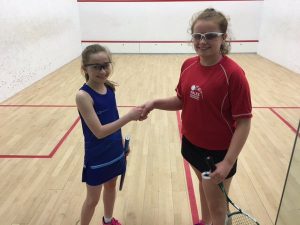 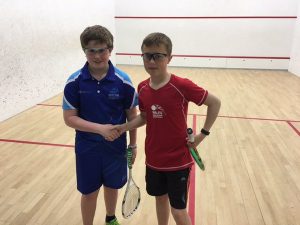 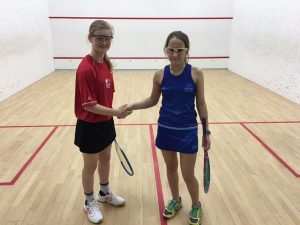 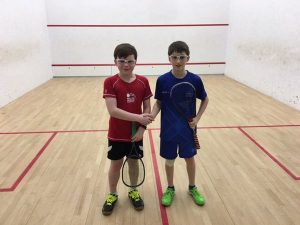