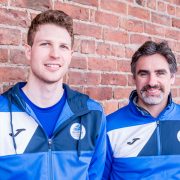 National Coach Paul Bell is confident Scotland can impress at this week’s men’s and women’s European Team Championships (ETC) in Helsinki which begins on Wednesday, April 26.

The men’s team will be competing in Division One as the top eight nations in Europe compete for medals, with Scotland looking to once again make the podium having secured a bronze medal last year.

The men’s squad includes Greg Lobban who makes a welcome return to competitive action having suffered a hamstring injury in the final of the Chicago Open last October. He is joined by Scotland’s number one Alan Clyne, Dougie Kempsell, Kevin Moran, Stuart George and Rory Stewart.

Bell, who was appointed National Coach last April with former world number four Martin Heath also coming on board as Elite Performance Coach, said: “We have changed the selection process this season and the players have really had to earn their right to make both teams by securing good results in tournaments.

“I’m delighted for Stuart George. He has had a really good season and managed to leapfrog a couple of players into the men’s team and earn his first call-up.

“Rory (Stewart) has been in the team for a couple of years gaining experience but this is his year to really step up and be a big part of the team.

“His results have been really good against players that are around the top 100 in the world.

“Players of that calibre will be the fourth player in the opposition team so if he could repeat his results that would be really positive.”

He continued: “It’s a good mix in the men’s team with the experience players able to help the younger ones.

“Alan with his experience leads by example and both Dougie and Kevin are playing well.

“It’s great that Kevin has returned to the pro circuit as it’s a major part of our strategy to get players playing at a high level as regularly as possible. So for him to make that decision despite doing well in his coaching is a good sign for us.”

Scotland beat Germany in the play-off for the bronze medal in the European Team Championships in Warsaw, Poland last year, the first medal for the men’s team in 17 years. England landed gold with France claiming silver.

Bell believes their main threat to another podium finish will once again be Germany.

He said: “Last year was the first time we were able to beat them to third place and it’s likely to be Scotland and Germany again fighting out for bronze.

“England and France are a little bit ahead of us in terms of strength in depth which is an historical thing.

“A lot depends how Greg (Lobban) gets on as he has been out for a long time and we don’t want to push him too much.”

Following their promotion in 2016, the women’s team will be competing with eight other teams in Division Two and looking to build on last year’s success.

The women’s side sees the return to national colours of Lisa Aitken who will compete alongside Scottish National Champion Georgia Adderley, Robyn Young, and Elspeth Young.

Bell said: “It’s a notable step up this year which is something we are ready for with some heavyweights in the division but also some newcomers like Hungary who we don’t know much about.

“It will be interesting to see where we sit in the pecking order, especially for the future because we want to get into Division One as soon as possible.

“We have Lisa (Aitken) back this year which is great and she brings her experience.

“Lisa and Robyn Young add maturity to what is a relatively young team and it’s great to have them both involved.

“Georgia is getting better all the time having played in a few PSA events and Elspeth is also someone we trust to perform well having had good results.

“We are in a good place, everyone has been preparing well with most playing in events in the lead up to Helsinki. Hopefully that means they’ll be firing this week.”